Reiner Schürmann and the Poetics of Politics

Reiner Schürmann’s thinking is, as he himself would say, “riveted to a monstrous site.” It remains focused on and situated between natality and mortality, the ultimate traits that condition human life. This book traces the contours of Schürmann’s thinking in his magnum opus Broken Hegemonies in order to uncover the possibility of a politics that resists the hegemonic tendency to posit principles that set the world and our relationships with one another into violent order.

Purchase Reiner Schürmann and the Poetics of Politics

Socratic and Platonic Political Philosophy: Practicing a Politics of Reading

Socratic and Platonic Political Philosophy: Practicing a Politics of Reading is an experiment in performative publication. A publication is performative when its mode of publication enacts the argument for which it advocates. In this case, the argument of the book is that Platonic writing is political insofar is it is capable of cultivating communities of readers concerned with the questions of justice, the beautiful, and the good.

Learn More about Socratic and Platonic Political Philosophy: Practicing a Politics of Reading 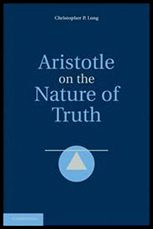 Aristotle On the Nature of Truth

This book reconsiders the traditional correspondence theory of truth, which takes truth to be a matter of correctly representing objects. Drawing Heideggerian phenomenology into dialogue with American pragmatic naturalism, Christopher P. Long undertakes a rigorous reading of Aristotle that articulates the meaning of truth as a cooperative activity between human beings and the natural world that is rooted in our endeavors to do justice to the nature of things. By following a path of Aristotle’s thinking that leads from our rudimentary encounters with things in perceiving through human communication to thinking, this book traces an itinerary that uncovers the nature of truth as ecological justice, and it finds the nature of justice in our attempts to articulate the truth of things.

Purchase Aristotle On the Nature of Truth 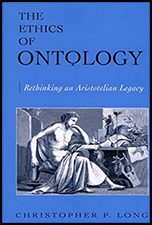 The Ethics of Ontology: Rethinking an Aristotelian Legacy

A novel rereading of the relationship between ethics and ontology in Aristotle, concerned with the meaning and function of principles in an era that appears to have given up on their possibility altogether, this book traces the paths of Aristotle’s thinking concerning finite being from the Categories, through the Physics, to the Metaphysics, and ultimately into the Nicomachean Ethics. Long argues that a dynamic and open conception of principles emerges in these works that challenges the traditional tendency to seek security in permanent and eternal absolutes. He rethinks the meaning of Aristotle’s notion of principle (archē) and spans the divide of analytic and continental methodological approaches to ancient Greek philosophy, while connecting Aristotle’s thinking to that of Levinas, Gadamer, and Heidegger.

Purchase The Ethics of Ontology: Rethinking an Aristotelian Legacy