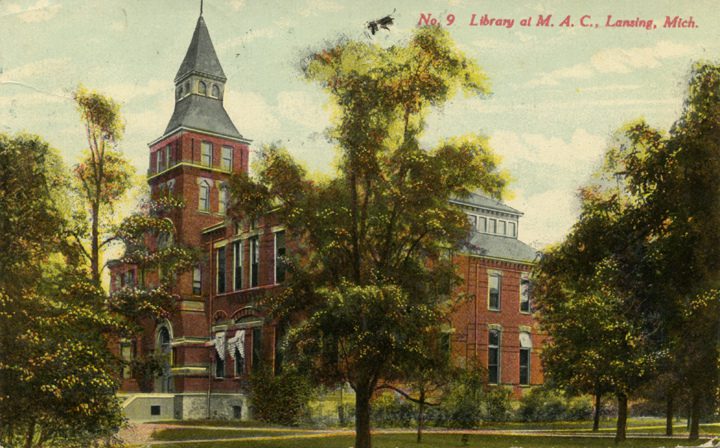 The Edge of the Oak Opening

As I begin my tenure as Dean of the College of Arts and Letters at Michigan State University I find myself thinking of these lines adapted from Deuteronomy 6:10-12 by Peter Raible:

The passage resonates with me now as I take up residence in the Dean’s office on the third floor of Linton Hall, a space that was itself for many years the Office of the President, first of Michigan State College, and then, under the leadership of John Hannah, of Michigan State University.

Linton Hall is the oldest academic building on campus. It sits at the edge of the original “oak opening” that was chosen in 1855 as the site for the Michigan State Agricultural College. 1 The office itself looks out over the “sacred space” around which Michigan State University has grown and flourished. 2 Indeed much of that growth was planned and executed by John Hannah within the walls of what is now the Dean’s office.

What it means to inhabit this office, John Hannah’s office, at the edge of the original oak opening around which Michigan State was founded is something I have been considering since I accepted the position of Dean of the College of Arts and Letters.

That it is now the Office of the Dean of Arts and Letters is perhaps appropriate, for it is the site from which the Michigan State University bodied forth during the middle part of the 20th century when John Hannah put the liberal arts at the center of its educational mission:

The concept of a great university as distinguished from a technical and professional school invariably emphasizes leadership in the realm of the cultural and humanistic… Michigan State was founded in the new scientific tradition, and has made a name for itself in that area of intellectual activity. But it has always placed a strong emphasis upon the liberal arts in general education. 3

It was not until Floyd Reeves, an educator from the University of Chicago, arrived at Michigan State College to create the Basic College in 1944 that a well-rounded liberal arts curriculum was established and MSC began to grow into the research university it is today. 4 The Basic College’s general education curriculum and the increasing emphasis on humanistic and artistic education helped to transform what had been a local agricultural college into Michigan State University.

If “we build upon foundations we did not lay,” it is important to keep in mind that those foundations were themselves laid upon a strong and sustained commitment to the arts and humanities.

As I move into John Hannah’s office, I feel the weight and power of that commitment; and as I begin as Dean of the College of Arts and Letters, I hope we will draw deeply upon it as we continue the important work that has been handed down to us to deepen our understanding of the world we share and to enrich the lives of those we encounter.