Today, the girls and I, along with my colleague, Dan Letwin, and his son, Nick, took to the local streets to canvass for Barack Obama as we did four years ago.

A lot has changed in four years, particularly with the kids, as the pictures posted here attest. 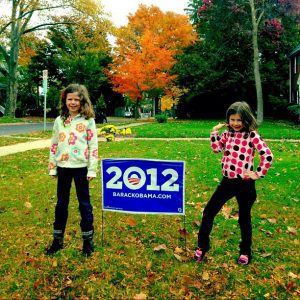 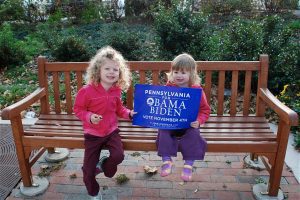 Changed too is the sense of possibility we had four years ago when we really didn’t know if it was even reasonable to think that America might elect an African American President.

Even then, however, I was trying to live a kind of critical optimism that would enable us, in what still remains “a dangerously adolescent country (Baldwin),” to cultivate a sense of our own limits and to nurture more just relationships with one another.

Today, I took to the Pennsylvania streets for Barack Obama despite what I believe to be his very significant failures to move our understanding of justice from one based on retribution and violence to one oriented by a deep sense of how our lives are woven intimately into the lives of others and the well-being of the world in which we together live. Retributive justice is, of course, no justice at all; rather, justice is rooted in our abilities to respond to others, however different they may be, in ways that move us toward a mutually more fulfilling life.

The rhetoric of retribution in the assassination of Osama bin Laden and the unrepentant use of drone strikes are two of the ways this administration, like the last, perpetuates a cycle of violence that is destructive of any possibility of peace. Even at this late date in human history, when retribution has proven itself unable to perpetuate anything other than perpetual violence, we humans remain addicted to the short lived satisfaction it offers, no matter how many times we experience the pain it will inevitably return to us.

And yet, despite all of that, I nevertheless took to the streets to canvas for Obama with my kids and my colleague because Barack Obama still articulates a compelling vision of what is possible for America, even if America – and perhaps Obama himself – is not fully prepared to live up to the ideals set forth.

I will settle, for now, for a President who recognizes the need for us to take care of one another, who understands the destructive impact our human economy is having on the earth’s ecology, and who has shown himself capable of moving difficult legislation through a recalcitrant and dysfunctional political system.

So today, just like four years ago, we set out to knock on doors for Obama; and today, as then, I found myself at once saddened and heartened. I was saddened by the man who, learning that we were there for Obama, shut his door in the face of three little kids and their somewhat taken aback fathers. That act of rudeness did not rise to the comic level that my argument with the libertarians did four years ago, but still, it demonstrated a lack of civility that has become all too common a part of our civic culture.

I was heartened, however, as I was four years ago, by the few we seemed to convince, and by the woman who was herself so pleased to welcome the six of us onto her front porch, where she listened to these two middle aged fathers still idealistic enough to believe knocking on a few doors could make a difference, and to their three excited kids willing to believe it would too.