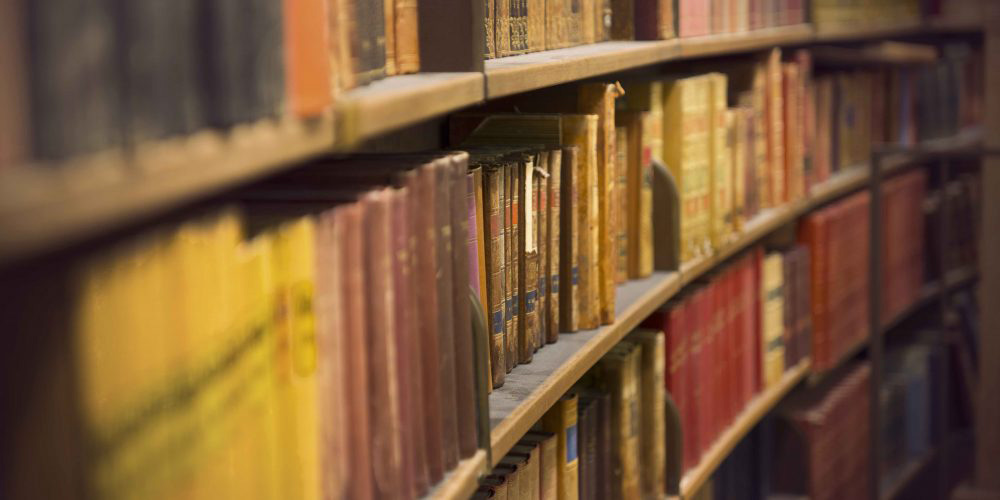 “Symbols effect the translation of discourse into a course, a path.” 1

It was early in the afternoon on November 21st, 1993 when I entered the expansive loft apartment above Houston Street. The space was full of books and paintings, but what I remember most was the overwhelming sense of absence. The effect was amplified by the art, large canvases by Louis Comtois. The bold vertical panels of color, insistent in their presence, rendered the absence of the painter and his partner, Reiner Schürmann, acute.

That day, however, we had come to collect the books for the Fogelman Library.

It wasn’t supposed to be this way.

Only a year earlier, I was sitting in Reiner Schürmann’s class on Plotinus, wondering how he could wring an encounter with what is originary out of a text that seemed on the surface so dry and systematic. The way he read awoke something in me that remains even now, 23 years later, vibrant and urgent. He taught us how to attend to the depth of a text, to listen for the implicit experience that animates the author and puts us in touch with what is most originary as it finds articulation in the tensions and ambiguities of the writing.

In his essay, “Symbolic Praxis,” Schürmann puts it this way: “the symbol opens up a path whose course makes one experience the origin. The condition of this experience is to ‘live without why,’ to let that which is, be.” 2 This injunction to “live without why” is a reference to one of Reiner’s favorite passages from Meister Eckhart:

“If a man asked life for a thousand years, ‘Why do you live?,’ if it could answer it would only say, ‘I live because I live.’ That is because life lives from its own ground, and gushes forth from its own. Therefore, it lives without Why, because it lives for itself.” 3

For Schürmann, this was an eloquent articulation of the anarchic nature of life and a gesture to a living task: to tarry with that which appears from out of itself for itself, to listen attentively and to attend carefully to the ways beings express themselves. Drawing on the Heideggerian notion of Gelassenheit, Schürmann articulates the condition under which an experience of the origin is possible: an ability “to let that which is, be.”

In a sense, this was the lesson Schürmann had to teach us, and it is a lesson that can only be learned by being lived. The life to which Schürmann’s teaching calls us is symbolic and poetic. As he writes: “The poietics of the symbol gives us something to do. Symbols create. The praxis which they invite us to is not inaugurated by man, but by symbols themselves.” 4 In “Symbolic Praxis,” Schürmann is at his most Benjaminian, analytically focused on four phenomena—feast, song, dwelling, and work—to expose a symbolic value that enjoins action. But the poietics of the symbol, rooted in the capacity to “let that which is, be,” “agrees to be multiple and without conclusion.” 5

To cultivate the habits of symbolic praxis requires a deep and ethical commitment to the plural and a refusal to posit principles of stability which, though perhaps comforting, remain always unjust insofar as they refuse to let that which is, be.

The power of his presence at the Graduate Faculty is difficult to convey; the impact of his absence impossible to articulate. For those of us at the New School at the time, Schürmann connected us to a great european tradition of philosophy that extended from Alfred Schutz to Hans Jonas, and most significantly, to Hannah Arendt. He had arrived at the New School in 1975, just prior to Arendt’s death, and had seen the Graduate Faculty Department of Philosophy through a most difficult period in which its continuing existence was constantly in question.

When I arrived in 1991, the Department had entered a period of renewal made possible by a remarkable collaboration between Schürmann, Richard Bernstein, and Agnes Heller. But even as these three dynamic scholars were bringing the Philosophy Department at the New School back to life, Reiner himself was dying of AIDS.

It wasn’t until the spring of 1992 that I was able to summon the courage to take Schürmann’s course, “Modern Philosophies of the Will.” As a teacher, Schürmann was an imposing figure, his unrelenting demand for excellence struck fear in the hearts of his students as we tried to live up to his expectations of us. And yet, however daunting, Reiner was a noble, kind, and caring man.

I loved the tone and rhythm of his voice. You can still hear it in his written prose. To this day, I pick up Broken Hegemonies or Heidegger: On Being and Acting, just to read a few pages so I can hear his voice again. This voice is heard too in the volume of the Graduate Faculty Philosophy Journal dedicated to his memory. In addition to essays by his friends and colleagues—among them Jacques Derrida, Rémi Brague, Robert Bernasconi, Agnes Heller, Vittorio Hösle, Dominique Janicaud, and John Sallis—you will find three essays of his and an account of his two-hour conversation with Martin Heidegger in Freiburg on March 11, 1966. A twenty-four year old Schürmann had written to Heidegger in part to press him on the question as to whether in the experience of the gift, of the granting of being, there is “an experience of saying ‘thou’.” 6 Schürmann’s account of the meeting is compelling, but what strikes me most about it is that his description of Heidegger as a reassuring teacher who had a tremendous ability to listen is itself an apt description of Schürmann.

By the fall of 1992, when I took both of his courses, one on Plotinus, the other on Meister Eckhart, the vibrant figure who had taught us in the spring had become noticeably diminished. Yet he never tired of teaching, and he always had time for his students. I remember late that semester going to his office hours and timidly knocking on his closed office door. I knew he was there because I had seen him walking into the building, an exhausted figure against a cold and grey New York autumn sky. After a few minutes of rustling, the door opened, and he welcomed me with a rye smile, saying: “you now have access to a rested mind.”

Less than a year later, the man himself would be put to rest, but his thinking lives on in the work of his students and in the life of the mind articulated so eloquently in those silent books we came to collect that late autumn afternoon in November 1993.

N.B. In looking for traces of Schürmann on the web, I found this audio recording of Reiner’s Introduction to Medieval Philosophy delivered in the Fall of 1991.