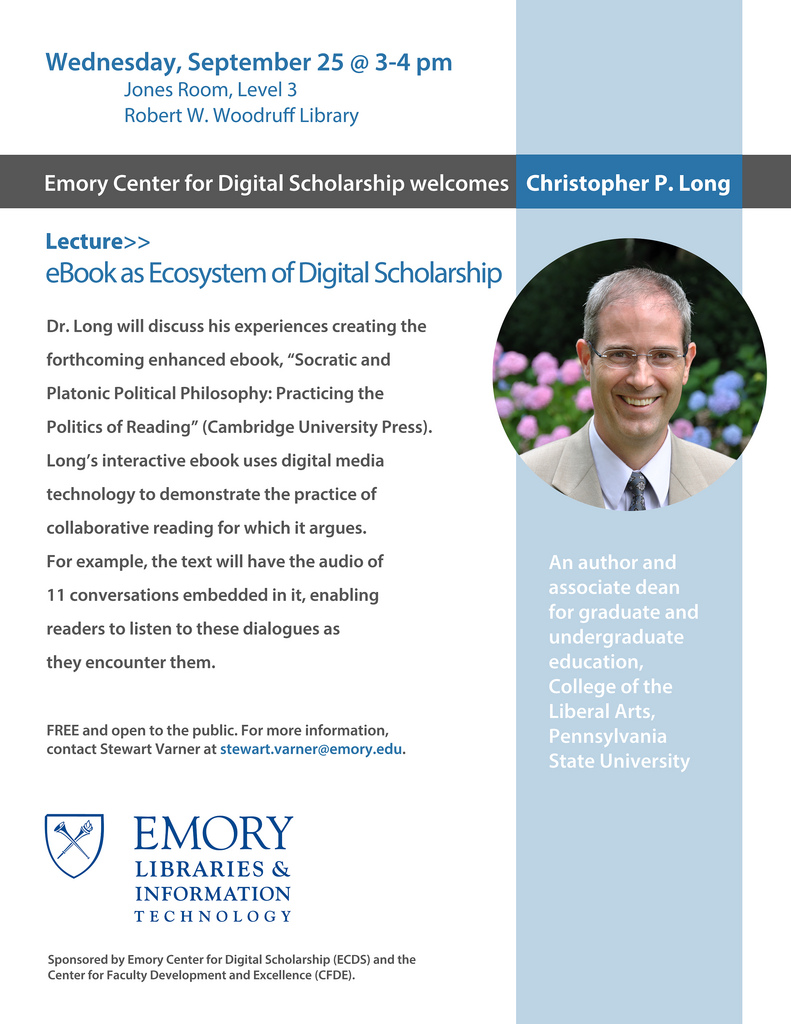 Socratic and Platonic Political Philosophy: Practicing the Politics of Reading (forthcoming Cambridge University Press) is an enhanced digital book that attempts to use digital media technology to cultivate the political practice of collaborative reading for which it argues.

The book’s central argument is that there is an analogy between the ways Socrates practices politics with those he encounters in the dialogues and the ways Platonic writing turns us as readers toward ideals of speaking and acting capable of transforming our lives and the community in which we live.

The video is available here, the curated Storify appears at the end of the post:

For Socrates, politics involves speaking words to individuals that will require them to turn their attention to questions of justice, beauty and the good, ideals that are at once alluring and yet always also elusive. For Plato, politics involves writing words to readers that will require us to do the same. The book traces the practices of Socratic political speaking and Platonic political writing through five dialogues: Protagoras, Gorgias, Phaedo, Apology and Phaedrus.

This presentation will begin with a very brief overview of the basic philosophical argument of the book and the prior Digital Humanities scholarship from which it emerges. We will then turn to the technologies the enhanced digital book will deploy to further cultivate a community of readers capable of performing the politics of reading and writing for which the book itself argues. In the final third of the presentation, deeper philosophical questions will be raised about the nature and limitations of authorial authority and about the connection between the book’s design and the ideals of reading and writing for which it advocates.

The book begins with what I call an “Overture” designed to open a space into which the reader is invited to enter. This space is intended to extend beyond the physical book into an online digital community of dialogue both with me as the author of a reading of Plato, and also with others interested in the possibilities raised by the book. This online community already exists in the ecosystem of online digital spaces I have created over the past five years (via Twitter, Facebook, Google Plus, Flickr, YouTube, and my system of blogs called the Long Road). 1During this time I have sought not simply to push information to others about my scholarly work, but rather to engage in substantive digital dialogue with a wider community about issues in which we share an interest.

So a community of scholarly and educated readers has already been cultivated in the course of the writing of the book itself, because the research for it was facilitated by an ongoing public dialogue with colleagues who joined me in discussion on my podcast, the Digital Dialogue. 2There are currently 63 episodes of the podcast, eleven of which are explicitly referenced in the book itself. 3In producing these podcasts, I invited scholars to join me to talk about their work and in the course of our discussion, my work was enriched and I came away with new or deepened perspectives.

The publication of the enhanced digital book is designed to further cultivate and enlarge the influence of this community of readers. A book that argues for reading as a collaborative endeavor should be published in a way that performs and enables collaborative reading.

To do this, the Cambridge University Press and I are developing a dynamic enhanced digital book that will embed the audio of the eleven podcasts into the digital book itself, enabling readers to listen to the podcasts directly as they encounter them in the text. In order to cultivate a community of collaborative reading, the enhanced digital book will also enable the reader to make all highlighting and annotations public if desired. Those annotations and markings will then themselves generate a feed that interfaces with a blog plug-in like Comment Press or some other form of integration by which the annotations and highlights can appear in public in ways that are open to further response. Although readers might decide to publish the annotations to a preferred social media site, the annotations should also be accessible to a blog I manage and moderate so that I can respond to and engage with readers as they engage with the book itself.

The publication of this enhanced digital book is designed to facilitate an ongoing dialogue about the book, its ideas and the larger questions of what I call in the book the “politics of reading.” As the conversation develops, I would envision recording new episodes of the Digital Dialogue podcast with readers who have had particularly insightful annotations or comments. Those podcasts too, if desired, could be made available in the enhanced digital book.

I envision the printed version of the book as another way to give readers access to this enhanced digital version and the community of dialogue to which it is intimately connected. We hope to include QR codes or some other method of moving the reader from the physical book to the online conversation. The hope is that the enhanced digital book will interface with existing systems of curated annotations as those found on the Kindle via Amazon.com and sites like Findings.com and Apple’s iBookstore.

Finally, the question of authorial authority emerges as central to this project. On one hand, by inviting readers to become active participants in an ongoing conversation about the ideas articulated in the book, the enhanced digital book is designed to recognize and cultivate the hermeneutical imagination of its readers and open new perspectives on the text for the author. In this sense, the publication of the book is designed to open a site of ongoing scholarly dialogue in which the author is but one of multiple interlocutors. On the other hand, by affording the author ongoing opportunities to moderate and shape the discussion associated with the book, its mode of publication could be taken to further reinforce the centrality and authority of the author. A central question thus emerges: how can digital technologies be deployed that will ensure civil, deliberative dialogue without re-inscribing the hegemony of the author into the published text?

The ideals of reading for which the book argues — the importance of attentively caring for individuals as such, of cultivating ethical imagination, and of orienting our lives toward ideals of justice, beauty and the good — cannot simply be argued for, they must be put into practice. This presentation at ECDS will be part of the larger attempt to engage an audience of interested scholars in order to further augment the community of active readers on which the success of the project ultimately depends. To that end, I will be live tweeting the presentation itself and invite others to join the discussion on Twitter by following @cplong and tweeting with the hashtag: #ECDS.