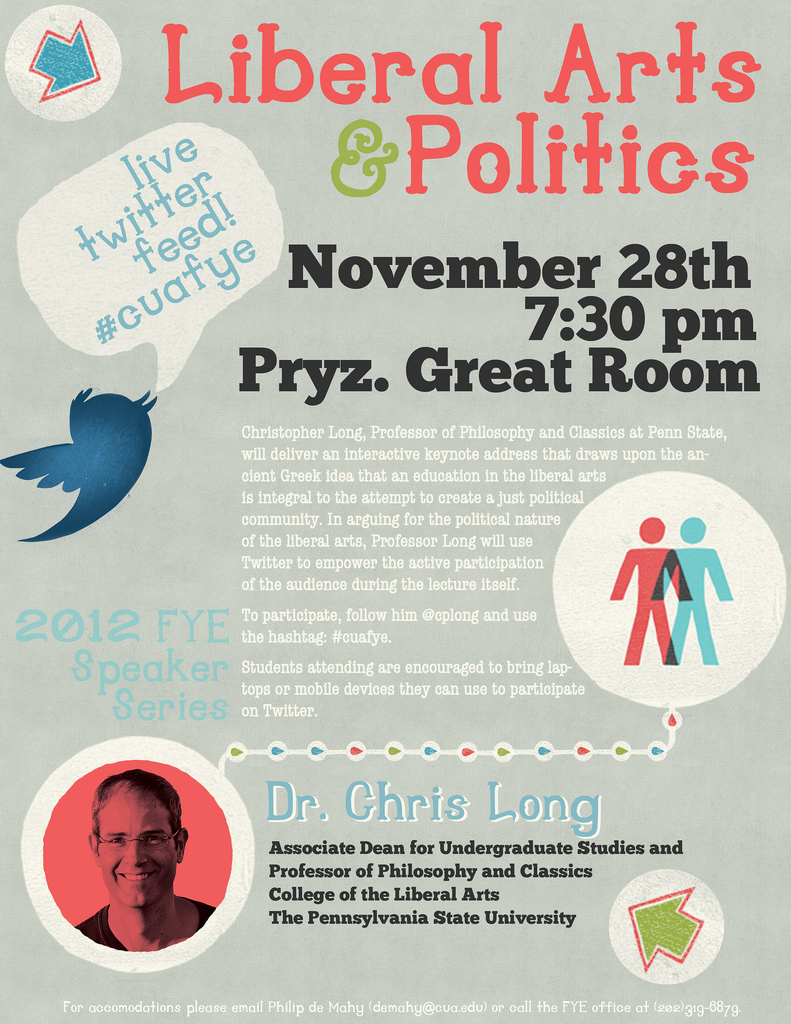 This is the central thesis around which my interactive keynote address to the 2012 freshman class at the Catholic University of America is organized.

Taking the figure of Athena as she appears in Aeschylus’ Oresteia as a guide, I argue that the fundamental virtue of a liberal arts education is the ethical imagination: our capacity to create new, more just possibilities of human community by imagining our way into the position of others, and particularly of those others with whom we disagree.

By inviting the 900 freshmen with whom I will be speaking to take an active role in the presentation through twitter (#cuafye), I hope to cultivate something of the ethical imagination for which the lecture advocates. The use of twitter is designed to enrich the content of the lecture by infusing it with a diversity of perspectives and to extend the boundaries of the conversation both physically, by including a wider off-site public, and temporally, by enabling the conversation to continue after the lecture itself.

To facilitate this, I have curated the content of the lecture using a variety of social media sites in addition to twitter.

I have created a Diigo list with links to all the resources mentioned in the lecture.

There is a Pinterest page with the diversity of images to which I appeal in the lecture.

And I have created a Storify of the interactive lecture in an attempt to curate something of the dynamic conversation that I hope will emerge from the lecture itself.

The strategic and integrated use of these social media outlets is designed to empower students to engage the material of the lecture in creative and innovative ways.

My hope is that in this way a space will be opened for students and a wider public to put their liberal arts education into practice in the spirit of the argument for which the lecture argues.

If I had to distill that argument to a single sentence, it would be this:

An education in the liberal arts is schooling in the beautiful life.