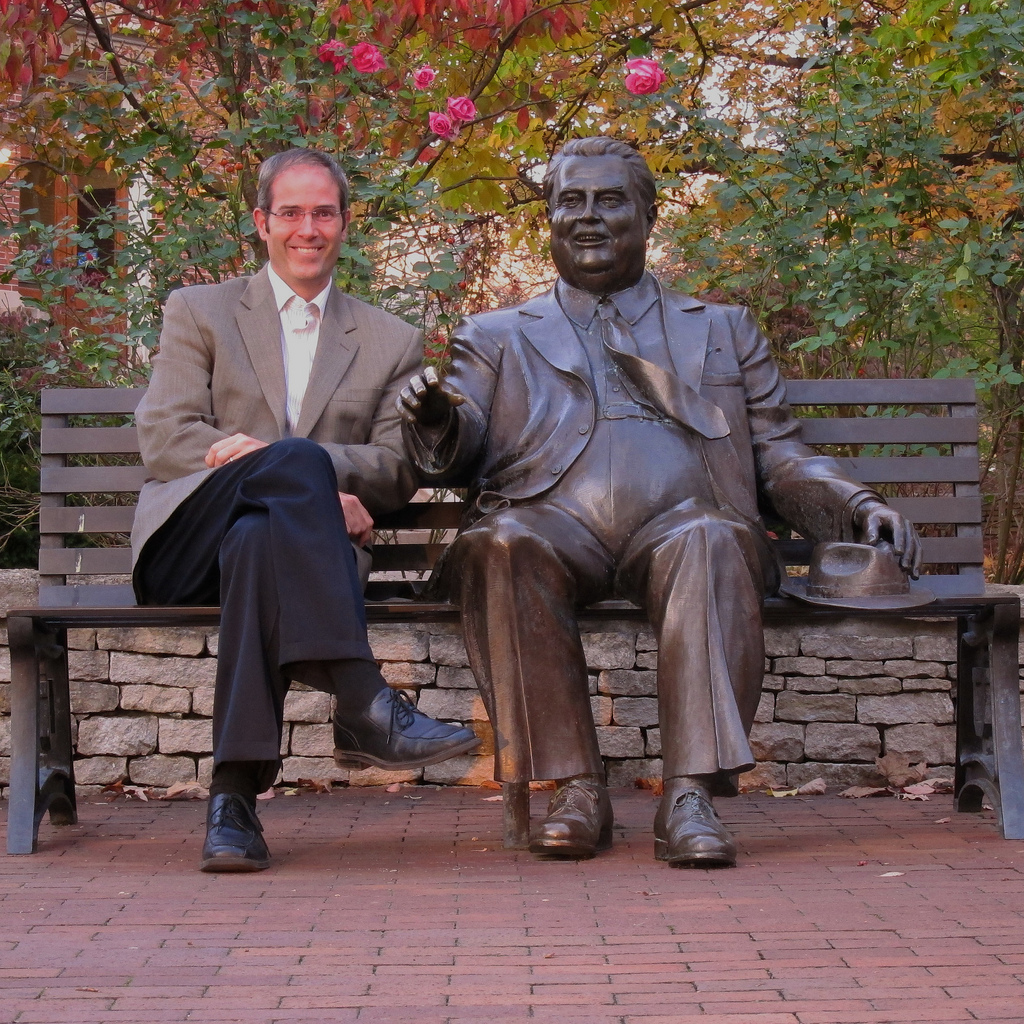 ALP at Indiana: Herman B. Wells

Sometimes without looking, one finds a paradigm – an example that can serve as a model.

I went expecting to hear administrators from across the Big Ten speak about best administrative practices and about the role of the public research university in the 21st century. Although I received what I expected in that sense, I did not anticipate encountering a figure who embodied some of my own most deeply held educational convictions: Herman B. Wells.

In 1958, the Committee on Institutional Cooperation was established by the presidents of the Big Ten Conference. Herman B Wells was one of its founding members and lasting champions. As I listened to former president of Michigan University, James Duderstadt, speak at Indiana about the importance of increased collaboration between public universities in the 21st century, the foresight of Wells and his generation of presidents came into focus.

Duderstadt described a 21st century world that does not respect traditional boundaries between regions and geopolitical borders. He spoke about the need for more collaboration between universities and the hope that we might reduce the zero sum attitude that establishes intensely competitive relationships between us and places us in extremely predatory environments with one another. The vision of cooperation Wells laid out and helped put into practice, places the CIC universities in a strong position to cultivate yet more cooperative relationships given the 50 year history of collaboration and interaction on which we can draw.

Wells was well known as an advocate for student self-governance, for a desegregated university and for academic freedom. He worked tirelessly and unobtrusively to end racial segregation in the dining halls and on campus housing; he protected Alfred Kinsey’s controversial and ground breaking research on human sexuality, and he worked to preserve the woods on campus. These are all elements of what I would call his highly cultivated ethical imagination: the ability to imagine one’s way into the position of each individual other. Wells held office hours for students, and they came to talk with him about their individual experiences. He signed each individual diploma himself, over 62,000 of them, because he wanted “a sense of direct identification with each graduate.”

This capacity for ethical imagination serves as a model for what is possible when administrative service is able to make decisions for the mission of the university by attending carefully and with care to each individual member of the community.

In her remarks, Provost Karen Hanson spoke of the suspicions faculty have about administrators. She traced that suspicion to the late ’60’s and early ’70s when the institutional authority of universities were called into question. She then spoke about the qualities of a good administrator: the ability to disagree without being retributive, the need to be open and patient, circumspection. She also reminded us that the word “administer” derives from the Latin, “ministrare“, which means “to serve”.

I left Indiana with a much deeper appreciation of the nature of administration as a way of serving.

Wells put it this way: “Remind yourself daily that general administration must be the servant, never the master, of the academic community. It is not an end unto itself and exists only to further the academic enterprise.”

And as we left Indiana, the news about the Sandusky indictment broke, and we returned to a Penn State transformed. In the week since, the nature of administration as service and the need for ethical imagination and cooperation have taken on a deeper and more urgent meaning.