By Christopher LongNovember 11, 2010LwCH, The Long Road
One Comment 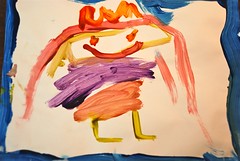 Today is DancinGirl’s birthday and it has been a day of well, dancing. And on Saturday, at her princess dance party, we will dance some more.

In case you are not familiar with the sort of dancing this little person does, here is a taste of some of her work a few years back.

Last night when Val was saying goodnight to our four-year-old for the last time, we were a bit wistful. After Val suggested that we might just try to hold onto her being four years old a bit longer, DancinGirl said:

“Only if we take a very long trip to Never Never Land.”

So it is with her and so it has always been: she is who she is, she is where she is and she is fully present to those who encounter her. I admire that, and learn from it each day.

As I watch her grow, I am amazed by the way she inhabits the world. Some people resist the rhythms of the earth, the seasons and the recalcitrant firmness of things. Some of us lack a degree of flexibility and nimbleness in our dealings with one another. But DancinGirl moves fluidly and with a peculiar and endearing grace that is all her own, as she enters into the lives of those she meets.  Because of this, people seem to be moved by her and move toward her, for they, like me, feel somehow affirmed simply by being in her presence.

Last year, I did a little interview with DancinGirl to capture something of her four-year-old self.  This year again, we took a few moments to consider things as she now turns five:

I wish her a very happy birthday today.