Reflections on the Hacking Pedagogy Presentation 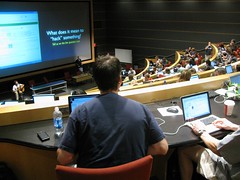 My friend and colleague, Cole Camplese, and I gave a joint presentation on a collaborative project we have developed called “Hacking Pedagogy.” The idea is to open a digital space in which we, together with the education technology community here at Penn State and beyond our institutional boundaries, will write a living field guide dedicated to articulating, cultivating and facilitating a cooperative approach to education.

Specifics about how to participate in this project are available on our Hacking Pedagogy Blog.

In reflecting on the event, there are a few points I would like to emphasize that were either insufficiently developed in the presentation or left unaddressed from the Live Question Tool from the event.

Let me begin with the term ‘hack’. There are a number of connotations associated with this term, some of which I would like to endorse, others I would not. I would not endorse, for example, the notion that a hack is something that involves the unethical appropriation of the work of others without giving them due credit. Nevertheless, I would like to affirm some of the subversive connotations of the notion of a ‘hack’, particularly those that understand hacking as an attempt to leverage existing structures of hegemonic authority in order to open up new possibilities of relation less dominated by a desire to dominate. Hacking has always had these two sides, the one interested in subversion for its own sake, the other animated by the attempt to establish new, more liberating and responsible community dynamics. This latter is the sense of hacking to which Rey Junco appeals when he suggests that “educators must become hackers.”
The Hacking Pedagogy project aims at undermining those existing pedagogical practices rooted in a logic of domination and control in which faculty authority suppresses student creativity.
The corrosive sense of ‘hack’ seems to have found a counterpart in a corrupted understanding of cooperation, at least as it was articulated by one respondent to our Live Question Tool. There it was suggested that cooperation can be understood to involve submission to a dominating power or interest. I do not deny that much coercion has been perpetrated under the guise of “cooperation.” Yet, there is a difference between cooperation and conformity; for genuine cooperation does not involve capitulation.
I tried to articulate the deeper meaning of cooperation in my post, From Engagement to Cooperation. There I suggested that cooperation means, literally, to work together, to act in conjunction with another. All human relations, indeed, all human interactions with the world, are predicated on a certain capacity to cooperate; without it, our eyes could not see, nor our ears hear.
These these rudimentary modes of cooperation – the sort of cooperation that opens the world to us – points to another, higher dimension of cooperation: the ability to work together to articulate a common vision of truth or justice or meaning. This is the sense of cooperation at stake in the discussion of cooperative education.
Thus, in the presentation, we sought to identify four pedagogical attitudes: