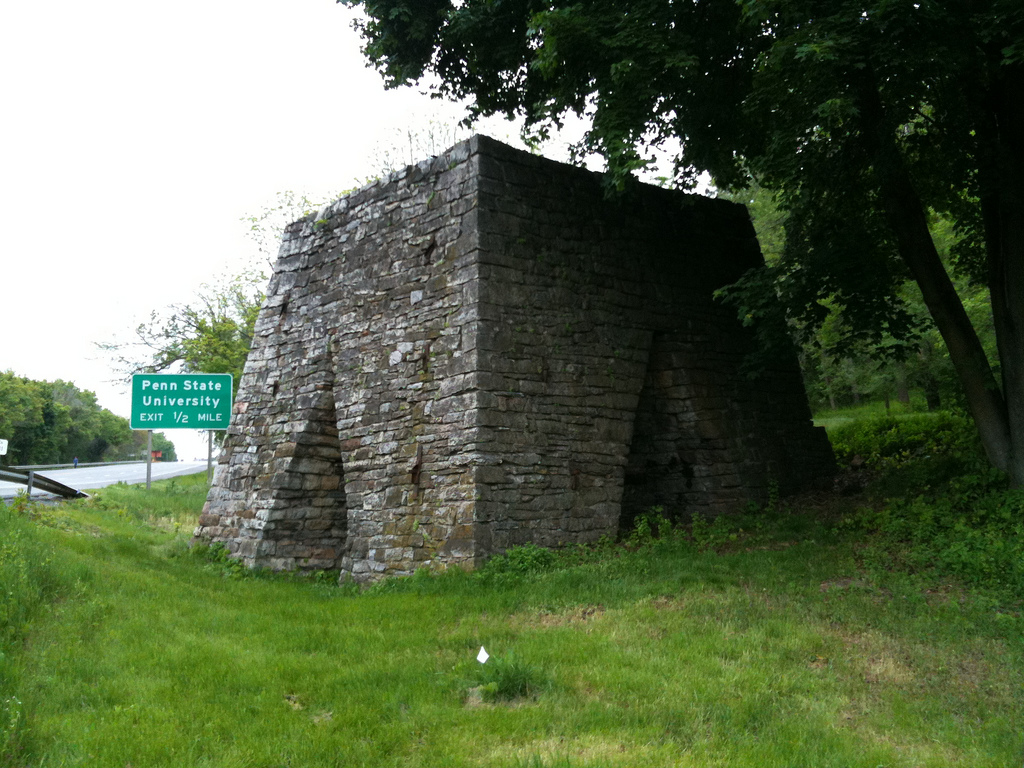 Delivered on May 15, 2010 at the Graduation Ceremony for Penn State World Campus Students

We gather here today to celebrate a milestone in the lives of each of our graduates. To arrive at a milestone, however, is a rather peculiar thing. For a milestone is less a destination, than the identification of a distance travelled, an orienting marker that reminds us of where we have been and suggests the distance we have yet to travel.

It is fitting that we gather here, in Innovation Park, at a crossroad, where I-99 joins Rt. 322 and the two roads proceed together for a distance before separating, each moving, as you soon will, in a direction of its own. We stand here too, not far from the remains of the Centre Furnace stack, preserved along Rt. 26 at Porter Road as one enters State College from the east. There, in June of 1855, the Board of Trustees of the Farmers’ High School gathered to inspect the 200-acre farm General James Irvin of Bellefonte had offered as a site for what would become the Pennsylvania State University.

Those stones too stand in a long tradition of milestones, stretching back to Roman times, when milestones marked the distance between cities; and they gesture yet further back in history to the ancient Greek practice whereby travelers would add a stone to the pile that marked a significant crossroad.

The Greeks called such stone piles hermata, naming them for Hermes, the god of boundaries and crossroads, the messenger god, who is present anywhere humans traverse the threshold of their private lives and enter into relation with one another to exchange ideas and commerce.

Hermes, the traveler, the god of communication and community, seems to have been at work among those stone remnants of the Centre Furnace stack; for an entire universe of ideas has brought young women and men together here in the hills of central Pennsylvania.

It is fitting too, that in a University no longer constrained by the bricks and mortar of its physical buildings we gather in Second Life and on YouTube and through the vast nexus of relations that the internet affords us. The creation of the internet and specifically, the social connections it enables are segments of a longer human journey. This is the journey of human education, a path that leads us, guided perhaps by Hermes himself, to reach out toward one another in an attempt to connect in meaningful ways.

This is the journey that has brought us to this milestone. You have come from as close as State College, Altoona and … Singapore and Canada. The distances you have covered to arrive here, be they short or long, have traversed the threshold that opens to a world of ideas, relationships and insights. We gather here today to celebrate what has grown from the connections you made with one another in a dispersed community of learning very much as real as the community that has taken root here around the Centre Furnace stack.

The Farmers’ High School was established here in part because of its remote location. A committee from Northumberland County investigating the site of the school called it “a very happy arrangement, since it serves to keep the students entirely out of the reach and influence of those temptations of vice and idleness, so common in and close around our large cities and towns” (Weeks, 19). The concern to guard against the temptations of vice led the state legislature to pass a law in 1859 against the sale of intoxicating beverages within two miles of the campus.1

Despite those early hopes that isolation would cultivate a community of virtuous learning, ideas resent confinement; they wither and die when hermetically sealed from the world that gives them life. So, slowly and over time, a High School became a College, a College became a University, and the University, drawn outward by its own educational mission to “improve the well-being and health of individuals and communities” from “Pennsylvania, the nation and the world” (Penn State Mission Statement), began to reach out beyond the physical boundaries of its walls. And so, we gather here to celebrate together a milestone at which we as a community have arrived, having been led by our own vision of education as integral to human well-being and as nourished by the world of human affairs.

This concern for living well was itself at the root of the desire, misguided though it was, to sequester the Farmers’ High School student from insidious cosmopolitan influences. And the desire to live well remains the animating force behind our adoption of new modes of communication capable of cultivating communities of learning between people of varying backgrounds, histories and cultures. If we are to learn the excellences we will need to live well in an era of increased connectivity and diversity, we will need to practice the art of reaching out to those with whom we disagree; we will need to expose ourselves to ambiguity in ways that make us feel uncomfortable, but also tune us into the deepest ambiguities with which we as humans must necessarily live.

This can best be accomplished if we recognize that education is a social activity. Indeed, as John Dewey reminds us, “what nutrition and reproduction is to physiological life, education is to social life” (Democracy and Education, 12). And if education nourishes our lives together, the very process of entering into social relation with one another educates. The cycle of cross fertilization whereby social interaction educates and education promotes a healthier social life in common is at the root of the steady growth and flourishing of the University and of each one of us individually.

But the educational virtues we need cannot be cultivated in isolation. They must be nourished by exposure to new ideas, differing perspectives and uncertain conditions. For these excellences–of communication, of openness to diversity, of critical thinking and of ethical imagination–are strengthened only with practice, as we navigate the uncertainties of our relationships with one another and the world in which we live.

I am proud to say that in this our students are educating us. Perhaps caught by the spirit of Hermes, the World Campus Psychology students have created an online community to integrate what they are learning into the concrete relationships they are developing with one another. Debra Mynar, the graduating president of the Word Campus Psychology Club, and Sonia Rodriguez, the graduating Vice President of the club, and their colleagues recognize the degree to which their own educational experience finds its deeper meaning in the community of learning they have created with their fellow students, despite their geographical dispersion.

And although much of the group’s activities have focused on career advice–at least according to the excellent coverage they received in Inside Higher Ed and the USA Today–I surmise that they began to recognize the community they were building together as the stuff of life itself rather than as a simple preparation for a future life. This lesson is the core of what such cooperative endeavors have to teach us about education itself; and it is a point that Dewey emphasized in an early essay entitled Self-Realization as a Moral Ideal when he wrote:

..if I were asked to name the most needed of all reforms in the spirit of education, I should say: ‘Cease conceiving of education as mere preparation for later life, and make it the full meaning of the present life.’ (Early Works, 4:50)

This, indeed, is the spirit of continuing education that led many of you to this milestone on your journey. It is the spirit that animated the founders of the Farmers’ High School to establish a community of education here in the hills of central Pennsylvania; and it is the spirit that must orient us now as we continue our education in a wide diversity of ways, reaching ever outward to embrace the world in its deep complexity, enriched by the time we have spent here together.

And as we depart from this gathering, may Hermes join us in our travels, encouraging us in all our endeavors to be mindful that our well-being is found in the journey well travelled and the communities we cultivate along the way.