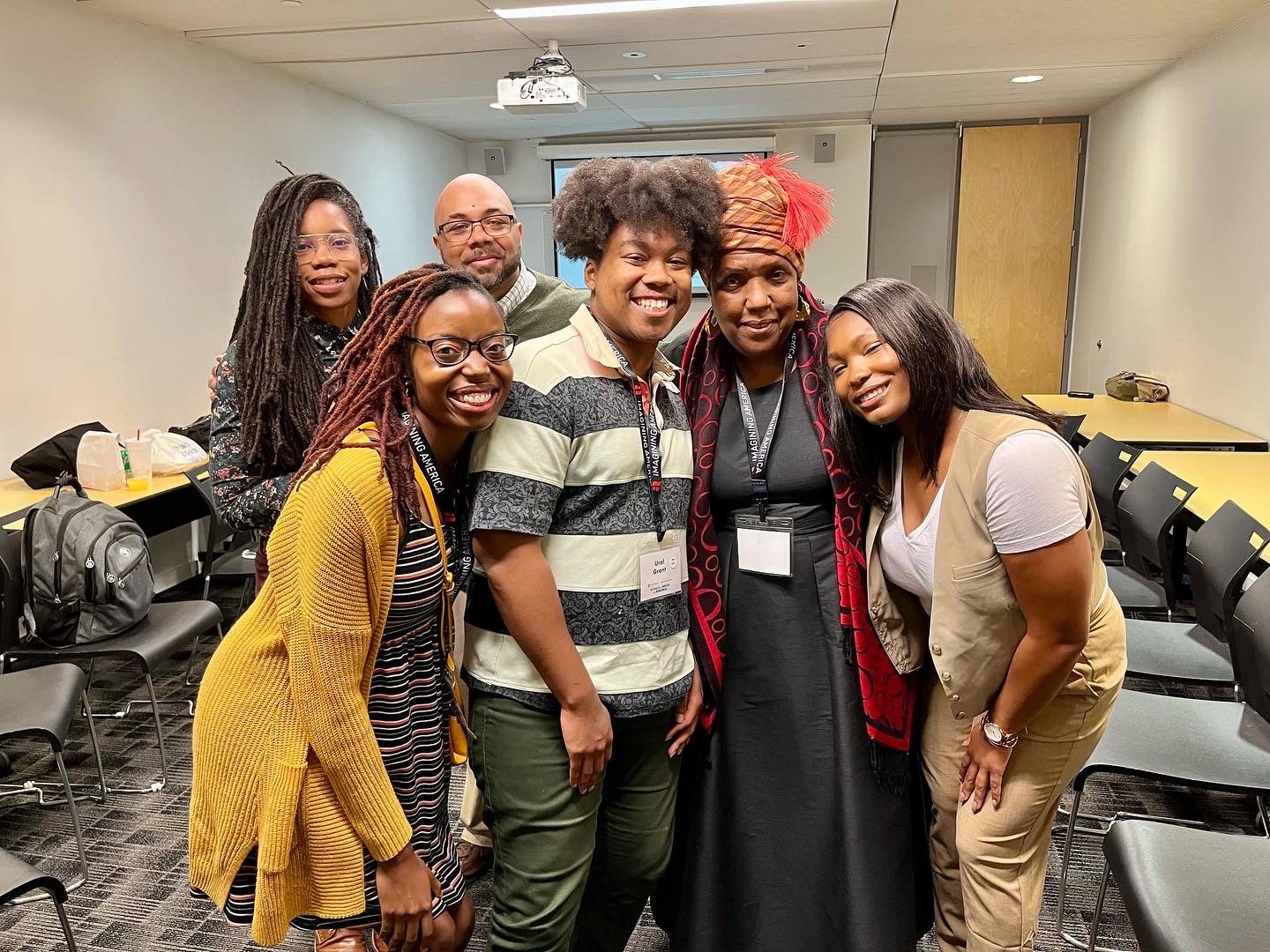 There are times when your life seems to be telling you a story. When this happens, it is wise to listen. In October 2022, my life began to speak the language of Ubuntu, the powerful African practice rooted in the idea that “a human being is human because of other human beings.”1

In his book, No Future Without Forgiveness, Desmond Tutu introduces Ubuntu as a characteristic a person can embody:

“A person with ubuntu is open and available to others, affirming of others, does not feel threatened that others are able and good, for he or she has a proper self-assurance that comes from knowing that he or she belongs in a greater whole and is diminished when others are humiliated or diminished, when others are tortured or oppressed, or treated as if they were less than who they are.”2

Although I have told this story now many times, and have experienced its power, personally and with colleagues, sharing it here in writing has proven more daunting than I anticipated—but if you accept this effort as an offering, however inadequate to the lived experience it may be, I will be grateful.

The video dropped just as we were preparing to leave for the National Gathering of Imagining America in New Orleans. Five graduate students and I were to fly out to the gathering that afternoon to give a panel presentation on “Reimagining the Graduate Student Experience: Prioritizing Joy.” In the video, Michigan State University President Samuel L. Stanley, Jr. announced his resignation. In the wake of the Nassar scandal, the COVID-19 pandemic, and leaked reports from the MSU Board of Trustees about attempts to oust the President, here again a leadership transition was upon us at Michigan State University. So as I processed the implications of the changes to come, I was grateful for an opportunity to travel with Jessica Reed, Sharieka Botex, Marquis Taylor, Ural Grant, and Toni Gordon, to the National Gathering of Imagining America.

The theme of the National Gathering was “Rituals of Repair and Renewal”—I knew I needed both. The opening keynote of the gathering was offered by Carol Babelle, retired executive director and co-founder of the Ashé Cultural Arts Center. Her approach was powerful—as she wove together a story about her life’s work, she invited artists who had worked with her to build the Ashé Cultural Arts Center to perform on stage with her. Her voice was thus amplified by the voices of her colleagues, enriched by the powerful performance of their art. What she said was powerful, how she said it was transformative. By lending her voice to those with whom she worked, Babelle’s keynote demonstrated the meaning of “Ashé” itself, a Yoruba word that means “the power to make things happen and produce change.”

Suddenly, there was Asali Devan Ecclesiastes on stage next to Carol Babelle, performing her poem Chasms. Listen.

“That space between who we are and who we want to be, the gaps between our high ideals and our base realities. … But somewhere in our midst, there’s been a paradigm shift. Justice is getting restless in its chains. Our youth find it useless to separate their souls from their brains, their truth is ingrained, their integrity sustained.”

Sitting there listening, I sensed something shift and settle, a deeper recognition that the leadership path I was on needed to be further refined, intentionally developed in a direction that was not yet fully discernible to me. I knew, however, that I needed to meet Asali to learn more about her and her poem.

By the time Babelle’s keynote address ended that first morning at the Ashé center, however, we were already late for the buses to return to Tulane University, where the gathering was being held. The crowd was moving fast and Asali was surrounded by people, so I thought I would seek her out later in the week as the gathering unfolded.

Yet, as too often happens, our obligations divert us from our best intentions. So I found myself on the flight back to Michigan having missed an opportunity to meet Asali Devan Ecclesiastes …

Less than a week later I was on my way to South Africa as part of a delegation from Michigan State University participating in the 2022 Ubuntu Dialogues Conference at Stellenbosch University just outside of Cape Town. On the long flight from Amsterdam to Cape Town—eleven hours straight south within a single time zone, I began to review the program, including members of the MSU delegation. In addition to colleagues from the MSU community, our group included graduate students from the University of Memphis and the University of Wisconsin – Madison, faculty from Brandeis and South Florida, and activists from Trenton to Lansing … and then I saw her name … Asali Devan Ecclesiastes from the Ashé Cultural Arts Center in New Orleans. Having missed Asali in New Orleans, I would meet her in South Africa!

“Ubuntu is the idea that the self is defined in terms of relationships to others, and that happiness and fulfillment are to be found within these relations. So, on this thinking, a person cannot be recognized alone outside other persons.”3

When I finally met Asali in Stellenbosch, we delighted in the way our pathways had conspired to bring us together for the Ubuntu Dialogues conference. As we talked, I quickly realized that I had much to learn from her. She could draw people into meaningful connection by the integrity of her words and the grace of her presence. Here I had met, to use Tutu’s language, a person with ubuntu.

Soon after we landed in South Africa, we received word that our colleague, Jabbar Bennett, Vice President and Chief Diversity Officer at MSU, would not be able to join us. It was determined that I would need to take on some of his duties. This meant, first, that I would need to do the greeting on the first day, and second, that I would somehow need to facilitate the final session of the conference in which the lessons of the week where shared.

For the first task, I took a risk. Although I regularly begin meetings at home by asking those gathered to join me in taking a deep breath together, I did not know how such an approach would be received at Stellenbosch. In New Orleans, however, I had experienced the power of ritual to connect people, so I decided to begin by inviting the group to take a deep breath with me so we could pause and reflect on the time we were prepared to have together.

This is what I said:

As you slowly let out your breath … I invite you to settle into this beautiful space—becoming open and present to all we will experience together this week; I ask you to send positive energy and love to Jabbar Bennett and his family; and, I ask you to pause here for a moment of gratitude to all our loved ones who are not here with us but who make our presence here with one another possible.

There is a passage in the book Holding Change by adrienne maree brown to which I keep returning. It is written by Alexis Pauline Gumbs. She writes: “…it is not easy to face the death of how things have been and to open up to the vulnerability of how things could be. But we must.”4

I begin my Greeting here with this ritual of breathing and with this passage—for the imperative to face the death of how things have been requires embodied practices of vulnerability so that our deepest interconnection might be activated.

The response I received to this way of beginning was moving. Participants came up to me afterwards to tell me how refreshing it was for an administrative official to begin this way, to open a space in which we could breathe together. And I began to experience the lesson I was being given to learn – that your position and power can be deployed to create spaces of meaning, connection, and wholeness if you are willing to “open to the vulnerability of how things could be,” as Alexis Pauline Gumbs put it.

But even as I was beginning to learn this lesson, I was anxious about the final session, for I knew that a space of wholeness and openness could not be created for that final session without help. So, I turned to Asali, and she suggested that we find ways to include more voices, to privilege the voices of graduate students and others, who could share their experiences, however difficult, with the group. I then asked Unifier Dyer, a Healer-practitioner and PhD student at the University of Wisconsin-Madison, and Sinethemba Makanya, a Traditional Healer and Post-doctoral fellow at the Centre for the Study of Race, Gender, and Class at the University of Johannesburg if they would facilitate the gathering. Their generous agreement to do this was a gift. After spending the week in one of the old classrooms in the Faculty of Theology building, a room with desks and chairs literally bolted to the floor. We agreed to convene everyone in a large circle outside the main entrance to the Faculty of Theology, in the fresh air outside of the stultifying colonial building where many of the architects of Apartheid had been educated.

There we gathered in a circle under one of the tallest trees in Stellenbosch. It was a beautiful early summer day in late October, and the participants, beginning with the students, brought forth the lessons they had learned during the week, the challenges they faced in practicing Ubuntu in the fraught spaces of Stellenbosch University, the joys they experienced in the connections they made.

And then, as our time together was coming to a close, Unifer turned to Asali, and Asali came into the middle of that circle and recited “Chasms” to the group gathered under the azure sky in the late afternoon sun.