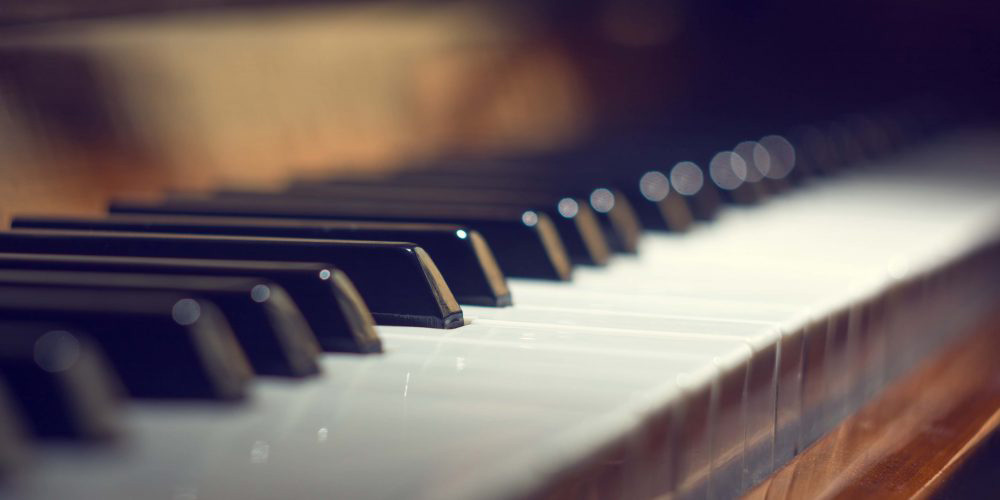 Learning to Play in a More Inclusive Key

On three different days in three different meetings, the same note was sounded. It struck a cord that resonated with me as I listened to faculty from three groups talk about their experience in the College of Arts & Letters.

At the end of March, we convened a series of “Conversations with the Dean and the Faculty Excellence Advocate (FEA),” one with women faculty, a second with faculty of color, and a third with LGBTQ+ faculty.

The common chord that emerged as a theme was the emotional and cognitive resources faculty in traditionally under-represented groups spend addressing the corrosive dynamics of an environment that diminishes the quality and legitimacy of their work. Whether it is a comment that undermines the value of one’s scholarship, an unwelcome look, or the general feeling of a lack of support, the effort it takes to absorb such negativity depletes the energy of our faculty and drains the College of academic productivity.

There has, of course, been an ongoing attempt to raise awareness of micro-aggressions — the dismissive gestures that implicitly or explicitly undermine the legitimacy of colleagues and their work.

Such micro-aggressions are corrosive to the culture of care and support that empowers us to be our best selves and to do our best work. They are all the more pernicious and difficult to address because they often remain opaque and unrecognized to those who perpetrate them. And when they are directly addressed, colleagues are quick to become defensive and reticent to engage in genuine dialogue.

This expense of cognitive and emotional energy extends, of course, beyond micro-aggressions to the structures of authority and power around which an institution is organized. The common theme I heard repeated in our conversations was, however, one phrase in a broader leitmotif: the desire to inhabit spaces in which one can do one’s best work, where each of us can perform at the highest level, and feel enriched and supported by colleagues who care about the value of our work.

The price we pay is too high ethically, socially, emotionally, and intellectually.

While we will always need to redress and remain vigilant against those micro-aggressions and structural inequities that deplete the cognitive and emotional resources of our faculty, we also ought to attend to and cultivate ways we can elevate, support, and nourish the work of our colleagues and students.

As I was considering how best to name such supportive gestures of care, I shared a draft of this post with my colleague Sheila Contreras. She pointed me to the work of Maureen Scully and Mary Rowe who call them “micro-affirmations” in their 2009 article, “Bystander Training within Organizations.” In this they draw upon Mary Rowe’s 2008 essay on Micro-Affirmations & Micro-Inequities in which she identifies micro-affirmations as:

apparently small acts, which are often ephemeral and hard-to-see, events that are public and private, often unconscious but very effective, which occur wherever people wish to help others to succeed. Micro-affirmations are tiny acts of opening doors to opportunity, gestures of inclusion and caring, and graceful acts of listening.

But too often in academia we see success as a zero-sum game in which the accomplishment of one colleague is felt directly to diminish the value of another.

To begin intentionally and consciously cultivating the habits of micro-affirmation, we might start by recognizing that when our colleagues succeed, our departments and programs improve, and when our academic units improve more opportunities open to us individually and as an academic community.

To the idea of micro-affirmations, then, we might also add that of micro-provisions to better better amplify the embodied nature of our responses to inequity and to reinforce the central importance of the desire for others to succeed.

A provision is a form of nourishment, a way to feed our shared hunger for transformative scholarship and pedagogy. More literally, a provision is fore-sight, a form of ethical imagination that enables us to anticipate what our colleagues and communities need to be most productive and fulfilled. In this sense, a provision is also a gift, rooted in generosity without expectation of something in return. 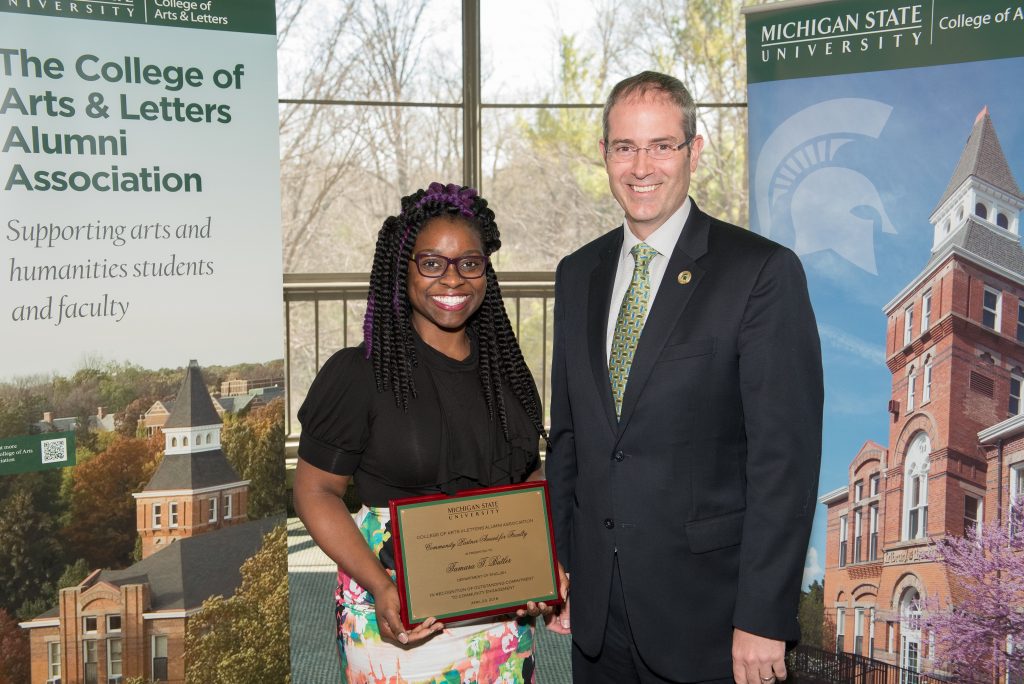 This award elevates Tamara’s work and provides her with a credential that will enhance her academic profile. In elevating the work of her colleague, Yomaira has helped to raise the reputation of the English Department and enriched the community in which we all work. Yomaira’s nomination was an act of affirmation and provision; it was a caring way to enhance the academic culture of the College, and I am grateful for it.

The common theme that resonated as a leitmotiv through our three meetings at the end of March suggests that by cultivating the habits of micro- and indeed macro-affirmation and -provision as modeled by Yomaira, we might as a College better learn to play in a more inclusive key, one that enriches an atmosphere in which we can all thrive and flourish.

Yomaira’s act of affirmation and provision for Tamara was reciprocated this year when Tamara’s nomination letter helped Yomaira win the 2018 Faculty Leadership Award. 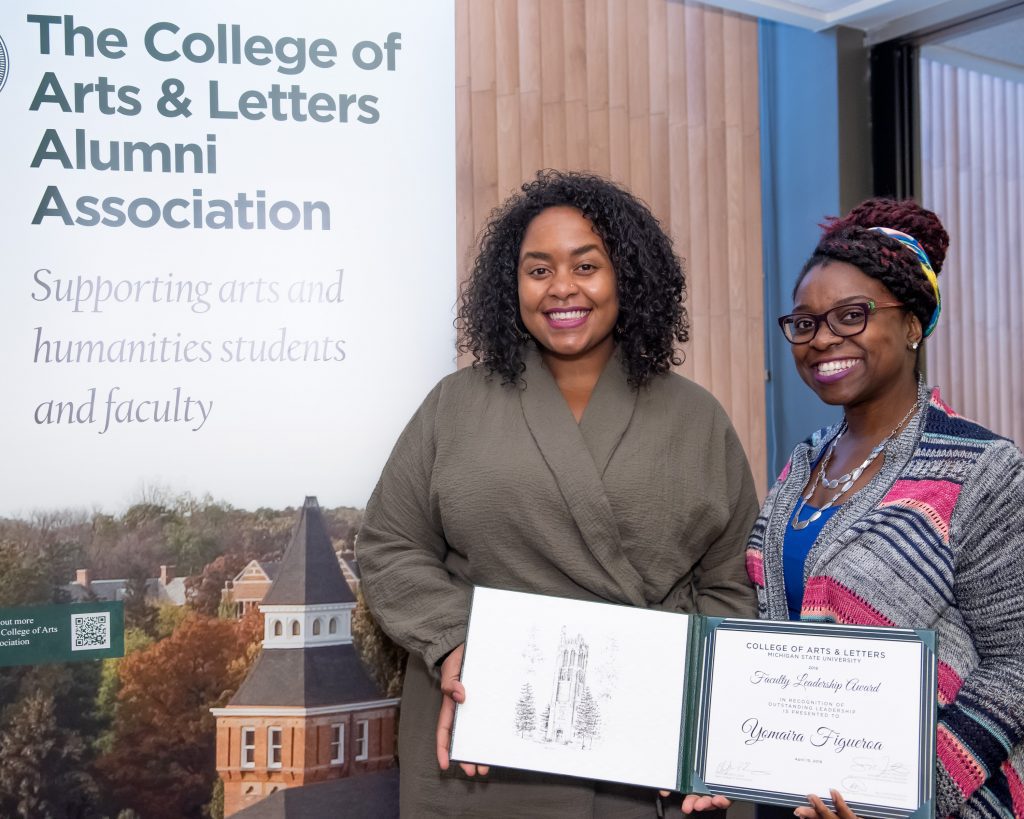