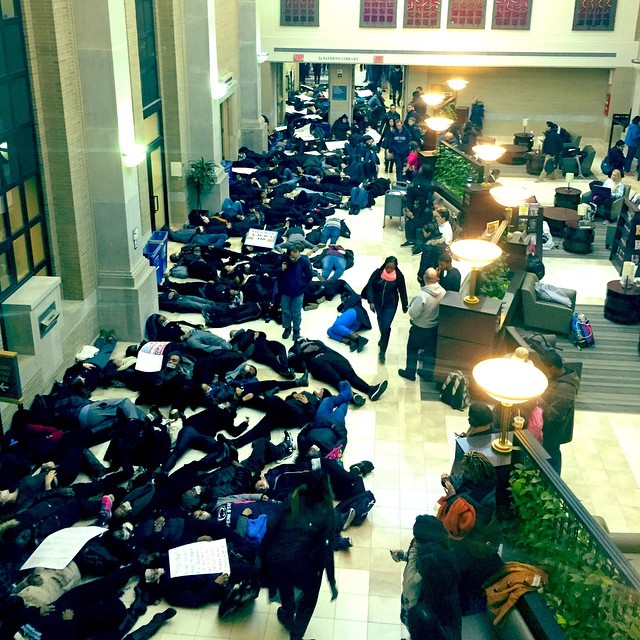 A Liberal Arts Response to #Ferguson

In December of 1962, James Baldwin published an open letter to his nephew in The Progressive.

It is a touching and intimate piece in which Baldwin reminds his nephew, his namesake, that he arrived to be loved: “To be loved, baby, hard at once and forever to strengthen you against the loveless world.”

In the wake of the events in Ferguson during the summer and fall of 2014, we all need something of the love of which Baldwin speaks to strengthen us against the loveless world and to give us the courage and the grace to respond to the complex questions they should awaken in us all.

Education, as an endeavor, is rooted, ultimately, in the love of which Baldwin speaks. 1

However, this love is, as Hannah Arendt recognizes, bidirectional: oriented at once toward the world and toward the children born into it.

Yet, Arendt too, recognizes that education is, in the end, “where we decide whether we love our children enough not to expel them from our world and leave them to their own devices … but to prepare them in advance for the task of renewing a common world.” 3

This task of renewal is rooted, for Arendt, in the human condition of natality, that capacity to begin something new by which the world itself might be made less loveless.

Strangely enough, I discerned something of the natality of which Arendt speaks in the “die-ins” our students at Penn State and across the country held in the weeks that followed the failure of the grand jury in Ferguson to indict Darin Wilson for the death of Michael Brown.

These demonstrations demanded an educational response.

In dialogue with my colleagues in African American Studies (with Paul Taylor, AnneMarie Mingo, and Courtney Morris) and with our Office of Digital Pedagogy and Scholarship (with Kate Miffitt, Casey Fenton, and graduate intern, Tyler Sperrazza), an idea was born to develop a class on Ferguson in which we might prepare our students, and ourselves, for the task of renewal these events demand of us.

Our first meeting about the course was held in mid-January; by the middle of February, we had learning objectives, the contours of a syllabus, and much of the content we needed to launch the one-credit course just after Spring break, on March 16th.

The course, echoing the title of Baldwin’s book, The Fire Next Time, is called The Fire This Time: Understanding Ferguson.

The liberal arts have always given us powerful ways to study and understand the world we inhabit. The events in Ferguson call for a liberal arts approach because they are multidimensional. They require us to think critically, understand historically, analyze soberly, and respond ethically. This is what the liberal arts do, and it is what we hope to empower our students to do in this course.

Drawing on a wide range of expertise from faculty in the College, we created a set of videos that form the backbone of the course curriculum and serve as open education resources for a wider public audience.

Here, for example, Kirt Wilson, Associate Professor of Rhetoric, speaks of the media frame through which Ferguson is filtered, and of body rhetoric and the politics of perception.

Produced by Casey Fenton in our Office of Digital Pedagogy and Scholarship, this video and others available on the Fire This Time website, offer us an opportunity to bring the expertise of our liberal arts faculty to bear on the complex questions Ferguson raises for us all.

From the beginning, this effort was animated by a decision to love the world enough to begin to take responsibility for it; and it is ultimately a response to Baldwin’s call in his letter to his nephew to live out the meaning of “integration,” which, he insists, if it means anything, means “that we with love shall force our brothers to see themselves as they are, to cease fleeing from reality and begin to change it…”