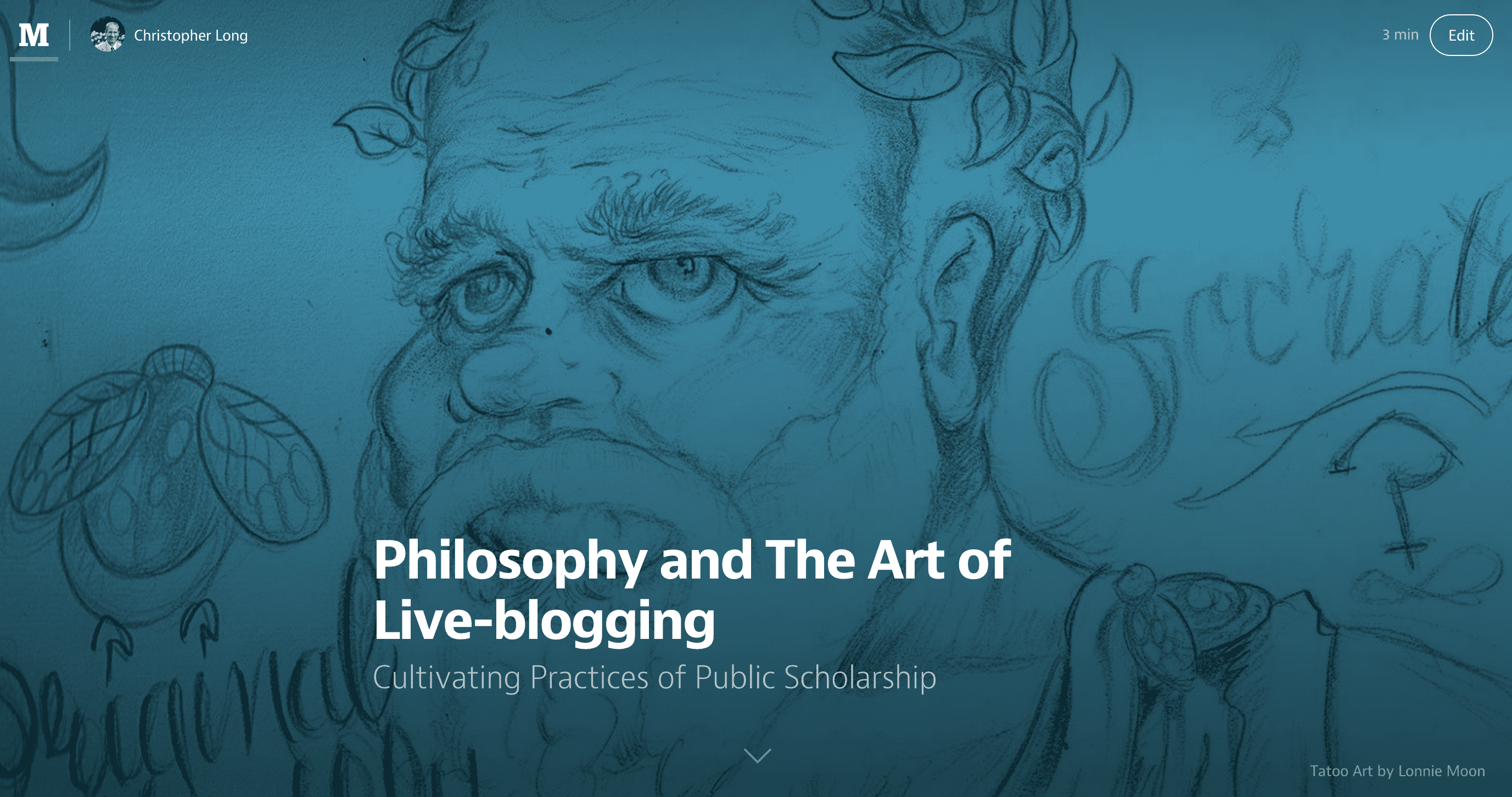 Philosophy and the Art of Live-Blogging

By Christopher LongMay 26, 2014Blogging and Social Media, The Long Road
One Comment

These thoughts on how Philosophy as a discipline is struggling to come to terms with the public affordances of social media were originally posted on Medium.

As a discipline, philosophy is struggling to come to terms with the public affordances of social media. This is a bit surprising given that Socrates himself never shied away from publicly engaging those he encountered in philosophical discussion.

But that was a long time ago, and philosophy has long since established itself as a profession.

The forces of professionalization seem to recoil as audiences dare to publicly share through social media ideas heard at academic conferences and scholarly presentations.

“No,” they say, “these thoughts are not ready for the wider public. They must be reviewed, vetted, polished. Live-tweeting and -blogging will inhibit people from risking new ideas in professional venues.”

But far the better strategy would be for us to cultivate excellent habits of public scholarship as we share ideas digitally with a networked public.

Live-Tweeting and -Blogging as Collaborative Research

To that end, we might think of live-tweeting and -blogging as collaborative research activities and thus as opportunities to engage a wider public in the development of our ideas. To do this well, to do it in ways that enrich rather than impoverish our work, it might be helpful first to agree on a few things and then to suggest how we might use words to cultivate supportive communities of collaborative scholarship.

First, let’s stipulate that all papers and talks delivered at professional conferences are public. As such, it is reasonable to expect that the ideas presented in such public spaces will be shared more broadly by those in the audience with the capacity and proclivity to introduce them into the wider public domain.

Second, however, let’s agree that a live-tweet or -blog post is not a peer-reviewed publication. It sounds obvious, but it’s important to emphasize both that the person doing the broadcasting might not have captured the nuances of what is being said, and that the one speaking has not had an opportunity to vet or approve of what is being broadcast.

Third, let’s be generous and willing to engage in a substantive conversation about the ideas being shared. We might presume that those broadcasting the ideas do so because they find them interesting or important; we might imagine too that in this they agree with the speaker, even if substantive differences likely remain.

Cultivating a Supportive Community of Scholarship

Let each post be animated by a desire to cultivate a supportive community of genuine scholarship oriented by a shared concern for truth.

Posts capable of nourishing such a community might include words that amplify the most striking, salient, or eloquent ideas of a speaker, thus extending the reach of what is being said.

They might include words that supplement the ideas under discussion by connecting them to related resources, or directing the community to yet undiscovered content or to others doing work on the topic.

They might include words that respond to specific ideas in the spirit of engaged dialogue by questioning it in certain ways, or by adding nuance, or by pointing it in a different but related direction.

They might even include playful words that allow us to celebrate the ideas we share and open us to new possibilities we might not otherwise recognize, caught up as we so often are in our own intensity.

One reason philosophy, as a discipline, may be reticent about the public affordances of social media is that philosophers recognize the transformative power of words.

This recognition, however, ought to animate rather than undermine our attempts to cultivate enriching practices of public scholarship.