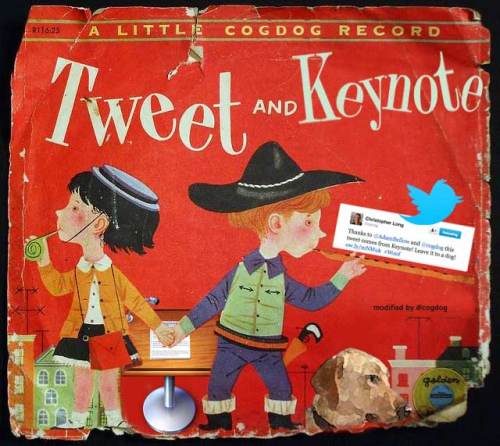 If you are, as I am, in the habit of live-tweeting your own lectures using Keynote and the Applescript Keynote Tweet 2.5, originally created by Toby Harris and subsequently updated by @cogdog, you will need to stick with Keynote ’09 for now.

Trying as usual to be an early adopter, I didn’t hesitate to upgrade to Mavericks the moment it came out. In the process, I “upgraded” my version of Keynote from ’09 to v6.

Upgrade is in scare quotes because the move from Keynote ’09 to v6 is in fact a regression with regard to Applescript. This I discovered as I prepared my presentation on the Public Philosophy Journal which I intend to live-tweet at the 2013 Eastern Division meeting of the American Philosophical Association.

When Keynote Tweet didn’t work, my first thought, of course, was to tweet @cogdog, who is always willing to help:

The response came quickly – it seems the dog rarely sleeps:

@cplong Yup. It won't work with Mavericks upgrade. Send your appreciation for non-backwards compatibility of AppleScript to Cupertino

So I thought I would take a look under the hood to see what the issue might be. @cogdog had a tweet of support complete with a helpful link for me:

My first thought was to test twurl in Mavericks to see if something was wrong at the core of the process. Twurl is the program that allows your computer to tweet on your behalf, as @cogdog explains in his post.

Yo @cogdog Tweeting from twurl

So I looked into the script itself, and although I don’t have a lot of experience with Applescript, I could make sense of the commands and thought all looked in order. I then emailed Toby Harris directly to see what he thought. He responded quickly and generously, saying that he’d heard that the new iWork shipped without Applescript support.

He was partly right. As I looked, there is some support for Applescript in the latest version of iWork, but the libraries are not as robust in Keynote v6 as they are in Keynote ’09. Specifically, from what I can tell, there is no way to define items within the body of the notes for a slide in Keynote v6 as there is for Keynote ’09. This is vital for Keynote Tweet because the script looks in the notes of the slide for the [twitter] and [/twitter] tags between which you add your desired tweet.

That led me back to Keynote ’09 on Mavericks. Running Keynote ’09, Keynote Tweet 2.5 still works as all the relevant library items are still defined.

If you use Keynote Tweet 2.5 with Keynote ’09 on Mavericks though, you need to keep in my that Apple’s new Gatekeeper feature makes it difficult to launch the script without turning going to Security & Privacy and selecting Allow apps downloaded from: Anywhere (or you can control click the script and select Open).

So, in the end, I should be able to live-tweet my presentation at the APA (and hope you will join us), but I will need to do it from Keynote ’09 because Apple has inexplicably hindered the capabilities of its latest version of Keynote.