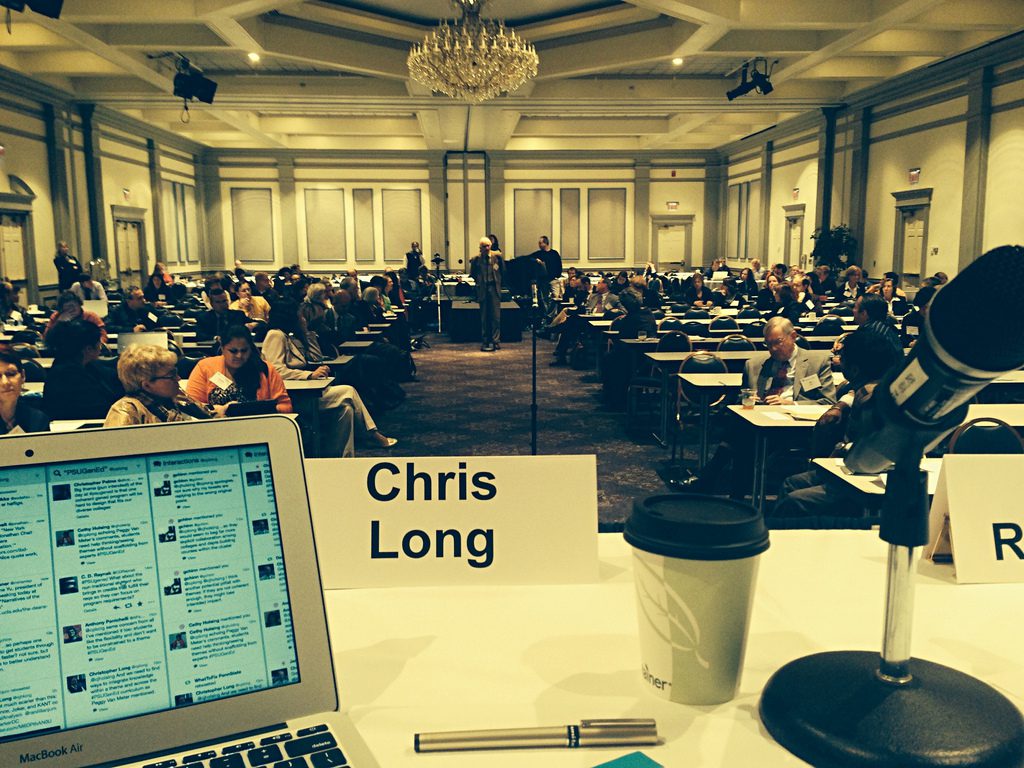 General Education Reform and the Art of Listening

By Christopher LongNovember 3, 2013The Administrative Life, The Long Road
12 Comments

By the time we took the stage as the final panel of the day at the 2013 Schreyer Conference on General Education at Penn State, we had heard the voices of expert educators, faculty, administrators, employers and alums speak about the value and importance of general education. Now it was our turn.

As members of the General Education Planning and Oversight Task Force, we were charged in March of 2013 with “developing a process for revisiting and revising general education” at Penn State.

Throughout the day, we’d heard insightful and often inspiring suggestions about what general education at Penn State could and should be:

Delbanco: Education should “help students learn how to think and how to choose.” #PSUGenEd

#PSUGenEd Delbanco argues that college should be about helping student discover themselves.

How do we find a way to bring humanistic questions into the classroom for students who already know what they'll specialize in? #psugened

Nick Jones – "If we value a transformational Gen Ed experience, it should be reflected in the P&T process" #PSUGenEd

Engagement and discovery as part of Gen ED experience. Seems a must. #PSUGenEd

Two themes that emerged as particularly important from my perspective as a philosophy professor and as an administrator were captured in this tweet from Michele Kennerly:

@rhosa you'll be heartened to hear that 2 of your fave topoi featured prominently in this morning's sessions: common & listening. #PSUGenEd

Developing a sense of the common and a capacity to listen – these being intimately interconnected – have over time become central concerns of my recent academic and administrative work both. More specifically, I have sought to put digital modes of communication to work in ways that attempt to cultivate community and attentiveness.

Administration, despite its caricature, is rooted in the practice of service, which I take to be closely connected to the capacity to listen. The word “administer” comes from the Latin “administrare” – to serve.

These two themes were foremost in my mind as I rose to frame the final panel of the day. This panel was to be different from the others – it was to be a reverse panel in which we asked questions of the audience and listened attentively in response to their insights. Here is how I framed it:

The structure of a reverse panel captures beautifully the spirit in which we have undertaken to revise the general education curriculum at Penn State. As a Task Force, we are seeking to embody the values of general education we want to integrate into the curriculum. One value about which we heard a lot today is the capacity to listen.
So, we panelists are here to listen to you, the audience. Although we each have a perspective to bring to bear on general education, we do not presume to have the requisite expertise to make decisions about the structure and nature of general education at Penn State independent of the Penn State community itself.
So we are here to listen, to listen and to learn from you what you value in general eduction, what you think is important to retain, what ought to be changed, what works and what doesn’t.

At first there seemed – at least from my perspective – to be a bit of skepticism about the whole idea; but as we progressed, working hard to listen conscientiously, people began to respond to our questions in ways that were thoughtful, creative and tremendously valuable to those of us charged with trying to bring about substantive general education reform at Penn State.

In the process, however, I hope those gathered at the conference felt heard and left willing to continue the conversation on the [email protected] blog and over twitter as the process progresses. (