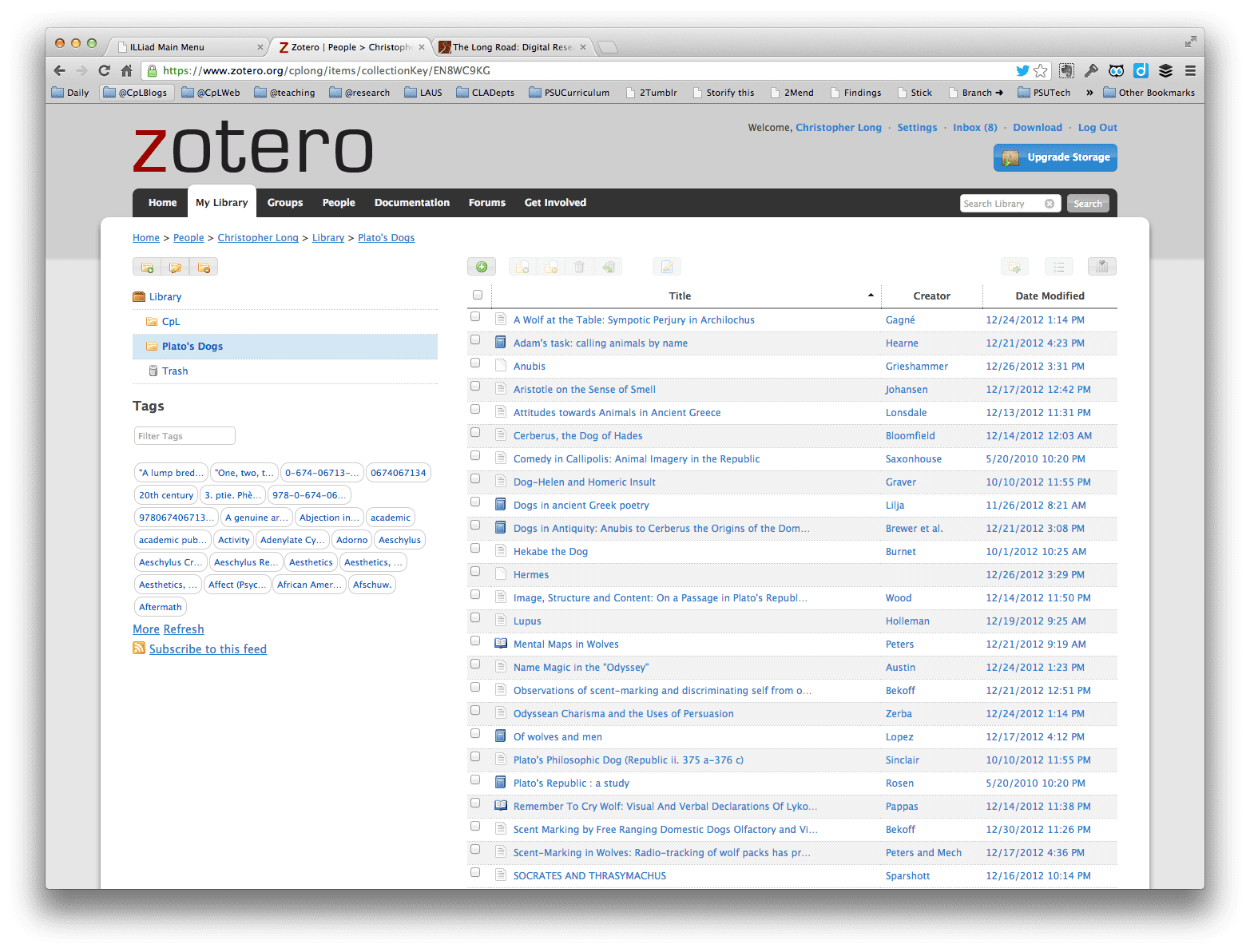 Even as I press to finish an article on dogs and wolves in Plato’s Republic for a volume entitled “Plato’s Animals” edited by Michael Naas, it is worth returning for a moment to our ongoing discussion of digitally enhanced research.

When I first wrote about my attempts to close the digital research circle in 2010, I had just relinquished EndNote in favor of Zotero for its superior ability to share and organize references. At the time, Zotero was still a plugin for Firefox and lacked a number of features I needed to facilitate my research – features like the digital reading, annotating and organizing pdf files. Those limitations led me to Mendeley, which I still value for collaborative annotations and research.

However, with three developments in Zotero, I have returned to it with renewed commitment. One reason for this commitment has less to do with features and more with the underlying open source philosophy of the product’s development. Zotero was developed by the Roy Rosenzweig Center for New Media, a leader in digital humanities scholarship and a strong advocate for open collaborative research.

Although I am committed to their values of collaboration and openness, without the functionality I need, I would not have been able to return fully to Zotero. Let me mention the three developments that have made Zotero central again to my digital scholarship.

First, no longer simply a plug-in for Firefox, Zotero is a stand alone product that works across browsers. I rely mostly on Chrome these days, and the stand alone version works beautifully with the Chrome extension.

Second, I have adopted Zotfile to facilitate the simple organization of my pdf files. Zotfile effectively turns Zotero into as powerful a pdf file organizer as Mendeley. It enables you to quickly pull references from online databases and across the web directly into your Zotero collections. (Don’t sync using Dropbox; rather use the native Zotero syncing service to avoid generating duplicates.) Zotfile also facilitates the simple renaming of all files based on the metadata in your reference collections. With Zotfile, Zotero pulls articles from library databases even more easily and efficiently than Sente, which excels in that area.

Third, and most importantly from my perspective, is the development of ZotPad, the iPad application for Zotero. Although it still lacks note taking functionality (under development), it brings all your documents from your collections to your iPad and allows you to use your preferred annotating program to edit, annotate and update the pdf files in your Zotero collections. Because it does not download all your files at once, it works much more efficiently than the Mendeley iPad app, which has languished since its early appearance. I use GoodReader for annotating, and love the ability to annotate files, return them to ZotPad and find them updated in my Zotero library when I return to a computer.

These recent developments have brought me much closer to my goal of closing the digital research circle. They have certainly made my digital research much more efficient; allowing me even to take a moment to write a post about it before returning, as now I must, to my work on wolves and dogs in Plato’s Republic.