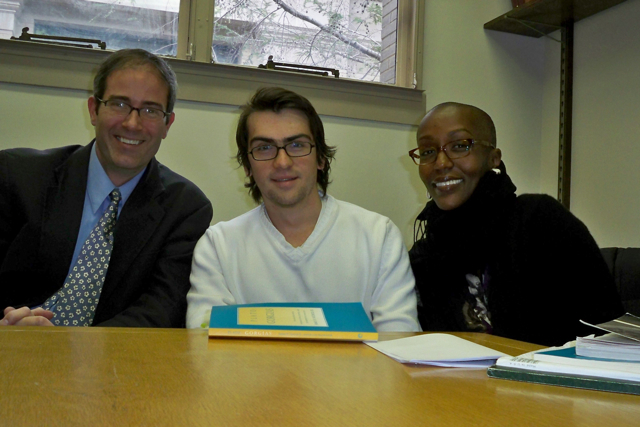 Axelle Karera, graduate student in Philosophy at Penn State, and Nicolas Parra, who is a visiting student at Penn State as he completes his M.A. degree from Universidad de los Andes in Bogata, Columbia, join me for episode 21 of the Digital Dialogue.

The impetus for this episode was a brief exchange between Axelle and Nicolas on the blog entitled: Gorgias and Socrates: The Feast of Friendship.  I thought it would be excellent to invite them to the Digital Dialogue to discuss the issues they raised there about the possibility of a noble kind of rhetoric, one that would not necessitate a polemical relationship between rhetoric and philosophy.

There were a number of passages to which Nicolas and Axelle appealed in the course of the discussion.  Nicolas referred to these:

I referred specifically to the analogies in the Protogoras. The relevant passages are: 329c-333c.

The crucial debate between Protagoras and Socrates about the unity of virtue (argued by using the analogies) is found from 349b-360d.

Finally, Socrates recognizes that he seems to have finished the conversation by endorsing Protagoras’ position (which was contrary to his at the beginning), and vice versa for Protagoras, is found on 361a-362a.

In the spirit of the last Digital Dialogue, I have tried to add a picture to give a sense of interlocutors and of the context of the discussion.