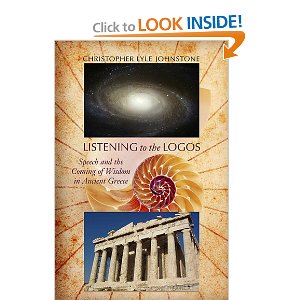 In episode 11 of the Digital Dialogue, I am joined by Christopher Johnstone who is Associate Professor of Communication Arts and Sciences here at Penn State.

His research and teaching focuses on the history of rhetorical theory, rhetorical criticism and the philosophy of rhetoric.  He specializes in the early development of Greek rhetoric.

His recently completed book will appear in November 2009 from the University of South Carolina Press entitled Listening to the Logos: Speech and the Coming of Wisdom in Ancient Greece. He has also written numerous articles on ancient Greek rhetoric and communication, including the essay on which we will focus our attention today entitled “Sophistical Wisdom: Politikê Aretê and ‘Logosophia‘” which appeared in Philosophy and Rhetoric, 39, no. 4 (2006): 265-89.

In episode 11, we discuss the history of how the Sophists and Plato have been interpreted and we talk about the differences between philosophy and rhetoric.  We differ strikingly about how to read Plato and this difference opens an interesting new possibility for understanding the way the Sophists have historically been juxtaposed to Philosophers.

It is rewarding to see that colleagues at other universities intend to use these digital dialogues in courses of their own.  Here is a comment I captured that was left on my Facebook wall by Holly Moore who is a graduate teaching assistant at DePaul University.