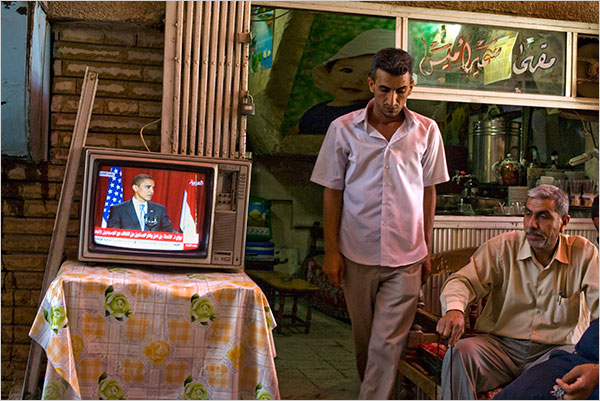 Something more than “mere words” is at stake when the President of the United States, Barack Obama, goes to Cairo, Egypt and makes a speech offering a new beginning to the relationship between the United States and the Muslim world in which he says, among other things, that the responsibility we have to one another as human beings is difficult:

“For human history has often been a record of nations and tribes and yes, religious subjugating one another in pursuit of their own interests. Yet in this new age, such attitudes are self-defeating. Given our interdependence, any world order that elevates one nation or group of people over another will inevitably fail. So whatever we think of the past, we must not be prisoners to it. Our problems must be dealt with through partnership; our progress must be shared.”

I have written here often of the power of words, and again it must be said that words are themselves actions. When Obama insists upon a stop to Israeli settlements, the words have the power to shift the constellation of forces that have been locked in violent struggle for generations. When Obama says that subjugation in the pursuit of self-interest is self-defeating, that the attempt to elevate one group by repressing another will inevitably fail, he opens up the possibility that another logic might prevail upon the world, one that thinks more responsibly about the responsibilities we have to one another, and to ourselves as interconnected co-habitants of an earth that cannot long sustain our violent ways of relating to one another.
To say that words are actions, of course, is not to say that actions other than illocutionary are superfluous; but those sorts of actions will only be effective if animated by words oriented toward the question of what is just and best for the whole of humanity. Such an orientation has never guided US foreign policy. My hope is that now, with a President with the courage to allow his words to articulate a more global conception of “self-interest,” it might.
I think something like this is heard in the passages from the Koran, the Talmud and the Bible Obama evoked at the end of the speech:

Koran: “O mankind! We have created you male and a female; and we have made you into nations and tribes so that you may know one another.”

Talmud: “The whole of the Torah is for the purpose of promoting peace.”

Bible: “Blessed are the peacemakers, for they shall be called sons of God.”