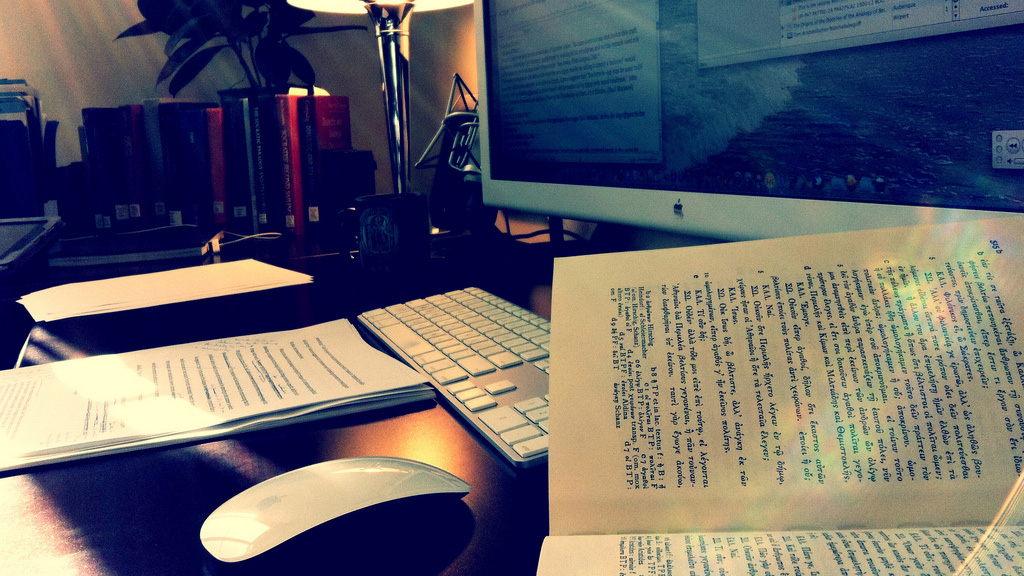 The Book As Ecosystem of Scholarly Dialogue

Consider this an invitation to continue along a path we have traversed together over the past three years.

This path, which began in the wake of my 2009 Summer Faculty Teaching and Learning with Technology Fellowship, has now, with the completion of a draft manuscript of my book, Socratic and Platonic Political Philosophy: Practicing a Politics of Reading, reached a kind of crossroads.

The book itself came to life in dialogue, digital and otherwise, with many of you. It has been enriched by our ongoing conversation about ancient philosophy, Socrates, the writings of Plato, and the transformation of literacy in a digital age.

With the submission of the manuscript, however, we approach a crossroads in which the digital dimension of the dialogue we have been having can either wither away as the book appears in traditional print, or further grow and blossom with the publication of an enhanced digital book that combines the virtues of print and digital scholarship and communication.

Consider this, then, an invitation to continue together along that second path, which, like the path that led us here, cannot be traversed alone.

An outline of the manuscript itself points in the direction of the proposed path. At the center of the manuscript is an analogy between the ways Socrates practices politics with those he encounters in the dialogues and the ways Platonic writing turns us as readers toward ideals of speaking and acting capable of transforming our lives and the community in which we live.

If, however, the book is not to be a mere abstract academic exercise, it will need to be published in a way that performs and enables the politics of collaborative reading for which it argues.

The manner in which the research for the book was undertaken in dialogue with you here in this public space has already cultivated such a community of readers. The path forward is to create an interactive and evolving ecosystem of print and digital content capable of enlarging and enriching the existing community of scholarly discourse we have cultivated through the Digital Dialogue.

Before we explore what such an ecosystem of scholarly dialogue would involve and how we might together accomplish it, let me chart the itinerary of the manuscript itself.

The Itinerary of Socratic and Platonic Politics

The seeds for the book were planted more than a decade ago in those courses on Ancient Greek Philosophy I taught as a young professor just out of graduate school. In dialogue with students over the course of semesters, the question of the peculiar manner in which Socrates says he practices the true art of politics in the dialogues presented itself with increasing urgency.  As we discussed it and focused more attention on the practice of Socratic dialogue, two things became clear: 1) we began to thematize and reflect upon our own dialogical practices and 2) we began to sense that Platonic writing itself was cultivating in us certain practices of engaging one another in dialogue.

The idea for this book, however, began to take determinate shape in the summer of 2009 when, as a Summer Faculty Teaching and Learning with Technology Fellow, I developed the Digital Dialogue, a podcast dedicated to cultivating the excellences of dialogue in a digital age.

The book that emerged from those digital dialogues, augmented and enriched by face to face dialogue at conferences and on campuses here in the US and abroad, is divided into seven chapters:

The book thus argues for a politics of reading and suggests that a reading of Plato offers a unique opportunity to cultivate such a politics. In order to accomplish something of what it argues, the book must be capable of combining the best of print scholarship with the best of digital scholarship. As an enhanced digital book, the text might be able to perform what it argues.

In her book, Planned Obsolescence: Publishing, Technology, and the Future of the Academy

, Kathleen Fitzpatrick articulates the intuition that animated the research and writing of this book.  She writes:

If we were to shift our focus in the work we’re doing as authors from the moment of completion, from the self-contained product, to privilege instead the process of writing, discussion, and revision, we’d likely begin to “publish” work–in the sense of making it public in readable form–earlier in its development (at the conference paper stage, for instance) and to remain engaged with those texts much longer after they’ve been released to readers (p. 12, see findings.com).

Although Socratic and Platonic Politics has not been “published” online and publicly peer reviewed, it has been exposed to the wider public from its earliest beginnings.  The decision to open it to the public in the form of audio podcasts that attempt to perform the practices of scholarly dialogue in a digital age was intentional, rooted in the recognition that Socrates articulates something of the truth in the Phaedrus when he says:

In a way, Phaedrus, writing has a strange character … if you question [written words] with the intention of learning something about what they are saying, they always just continue saying the same thing” (Phaedrus, 275d3-10).

Podcasting, because it is more dynamic, fluid and less easy to cite, offered the inchoate ideas of the book a space in which to move and grow. They developed, however, not simply in as I engaged primary and secondary texts in the quiet, private spaces of the library and my study — though they developed there too, and importantly so — but also in dialogue with others.

Further, these dialogues were for the most part staged around the scholarly work of those I invited to the Digital Dialogue, as opposed to being centered on the Socratic and Platonic Politics project itself. The podcast thereby exposed the ideas ultimately articulated in the book to a wider range of scholarship by forcing me, in preparing for each episode, to read a wider range of work in a responsible way that would lead to an enlivening and fulfilling public dialogue on the podcast itself.

The public nature of this philosophical research had a powerful motivating effect. In fact, I would not have read nearly as much nor as diverse a collection of scholarship for the book had I not been motivated by the knowledge that my colleagues would be joining me for a public discussion of their work on the podcast.

Cultivating the Politics of Reading

To do this I envision a dynamic enhanced digital book that will embed the audio of the eleven podcasts cited in the manuscript into the digital book itself, enabling readers to listen to the podcasts directly as they encounter them in the text. In order to cultivate a community of collaborative reading, the enhanced digital book should also enable the reader to make all highlighting and annotations public if desired.

Those annotations and markings should then themselves generate a feed that interfaces with a blog plug-in like Comment Press or some other form of integration by which the annotations and highlights can appear in public in ways that are open to further response. Although readers might decide to publish the annotations to a preferred social media site, the annotations should also be accessible to a blog managed and moderated by me so that I can respond to and engage with readers as they engage with the book itself.

The publication of this enhanced digital book is designed to facilitate an ongoing dialogue about the book, its ideas and the larger question concerning the politics of reading. As the conversation develops, I envision recording new episodes of the Digital Dialogue podcast with readers who have had particularly insightful annotations or comments. Those podcasts too, if desired, could be made available in the enhanced digital book.

I envision the printed version of the book as another way to give readers access to this enhanced digital version and the community of dialogue to which it is intimately connected. I would like to have QR codes or some other method of moving the reader from the physical book to the online conversation. I would hope that the enhanced digital book would interface with existing systems of curated annotations as those found on the Kindle via Amazon.com and sites like Findings.com and Apple’s iBookstore.

This vision for Socratic and Platonic Politics combines the best elements of print scholarship with the best elements of digital scholarship: by bringing the print culture of rigorous, creative and careful reading, clear and compelling writing, peer review, and detailed and attentive editing together with the digital culture of dynamic interaction, exposure to a widely educated public, and the cultivation of a community of actively engaged and creative readers, the publication of the book would perform the very politics of collaborative reading for which it argues.

An enhanced digital book designed to create an ecosystem of scholarly dialogue is the above mentioned second path I hope to chart; but it is a path that cannot be embarked upon without you.