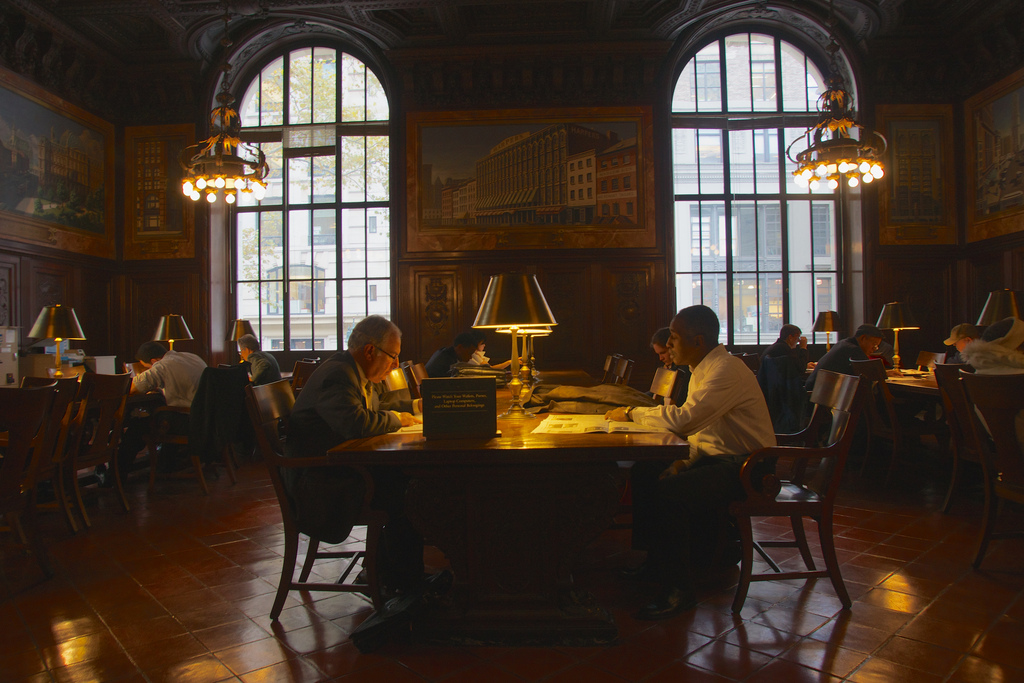 Seeding Publics from a World of Readers

By Christopher LongJune 4, 2014Digital Scholarship, The Long Road
One Comment

In his own essay on Kant’s “What is Enlightenment?,” Foucault ascribes to Baudelaire a modern attitude that captures well the spirit of Kant’s public essay on enlightenment. For Baudelaire, according to Foucault, modernity is “an exercise in which extreme attention to what is real is confronted with the practice of the liberty that simultaneously respects this reality and violates it.” 1

Kant’s essay is not merely a performance of public philosophy, it is as also the practice of a liberty that simultaneously respects and violates the political realities of its time. Its respect for the political realities of the 18th century Prussian state can be heard in the way the text carefully opens a space for the free use of public reason by separating it decisively from the private use of reason, which remains constrained by duties to the state into which a private person contractually enters. 2

The essay’s violation of these realities can be heard most poignantly at the end, when Kant suggests that freedom of thought might cultivate “in the mentality of the people” a freedom of action capable of transforming the very principles of government. 3

For all its appeal to the importance of the public use of reason, as itself a practice of liberty that respects and violates the political realities of its time, Kant’s essay is situated, as Kant himself recognizes, in an inchoate public sphere. In the essay itself, the nascence of the public to which the essay is addressed comes to language in two ways, first in the distinction Kant articulates between the “and enlightened age [einem aufgeklärten Zeitalter]” and “an age of enlightenment [Zeitalter der Aufklarung],” and second, in the way the essay speaks of the public use of reason addressing “the entire public world of readers [vor dem ganzen Publicum der Leserwelt]. 4

This later formulation points to the beginning of an important transformation of the public sphere as it moved from being a space of public authority to one in which private citizens came together to form publics capable of holding public authorities accountable.

Habermas suggests the significance of Kant’s formulation when he writes that the “history of words preserved traces of this momentous shift.” He goes on mark the 18th century as the time when this shift in the meaning of the public took place:

Until then one spoke of the “world of readers” (Lesewelt), or simply of the “world” (Welt) in the sense still used today: all the world, tout le monde. Adelung draws a distinction between the public that gathered as a crowd around a speaker or actor in a public place, and the Lesewelt (world of readers).” 5

Habermas points to the appearance of the use of the word “Publikum” in 18th century Germany, spreading from Berlin, as an indication that this new meaning of the public was gaining currency. Here, for the fun of it, is an Ngram of “Publikum” in German between 1700-1850:

In speaking of the “public world of readers [Publikum der Leserwelt]” Kant brings something of this new meaning of Publikum to language even if he continues to speak of the “Leserwelt.” The text itself seems to articulate a new conception of the public.

Even if, as Cronin rightly suggests, the manner in which Kant anticipates the liberal idea of the public sphere as a site for the creation and consolidation of public opinion is complicated by the peculiarly inscribed nature of Kant’s understanding of the “public” in his essay on enlightenment, still, it is not difficult to recognize that the essay itself goes some distance in seeding a public capable of gathering itself in such a way as to hold governmental authorities accountable. 6

Eileen Joy suggests the power publications have to seed publics when she writes that “publication” should be “understood not only as the primary vehicle for the dissemination of our thinking, but also as the production of actual publics, without which intellectual and cultural life cannot flourish nor be shared.” 7

Such seeds, of course, must be cultivated, and much depends upon the soil into which they are planted. As a practice of liberty, Kant’s essay might be read as an attempt to seed a public the soil for which had not yet been well prepared.

Shifting the metaphor, Dewey speaks still 170 years later of an “inchoate public” that remains incapable of organizing itself until it becomes able to “canalize the streams of social action.” Here is the passage from The Public and Its Problems (1954):

An inchoate public is capable of organization only when indirect consequences are perceived, and when it is possible to project agencies which order their occurrence. At present, many consequences are felt rather than perceived; they are suffered, but they cannot be said to be known, for they are not, by those who experience them, referred to their origins. It goes, then, without saying that agencies are not established which canalize the streams of social action and thereby regulate them. Hence the publics are amorphous and unarticulated. 8

In her essay, Public Knowledge, Noëlle McAfee argues that Dewey has a three-pronged solution for the problem of an unarticulated public:

Dewey’s invocation of canalization is itself a call for habituation, for the cultivation of a public aware of the consequences of its own actions; a public that does not simply feel, but perceives — a perceptive public.

It is tempting to say that we are today no closer than the public of Dewey’s 1954 text, or even that of Kant’s 1784 public essay, and yet, perhaps we might continue to till the soil of a perceptive public, to canalize the streams of social actions, not simply in our face to face dialogical conversations, but also by cultivating practices of publication and capacities for public gathering through which a world of passive readers might be transformed into perceptive publics.

[This is the second in a series of posts associated with a public writing project Mark Fisher, André Avillez, Kris Klotz and I are undertaking in connection with our work on the Public Philosophy Journal. We are attempting to use our individual blogs as public spaces in which to begin collaboratively writing an essay for peer-reviewed publication in an open access journal. The collaborative essay has the working title, Public Philosophy and Philosophical Publics: Performative Publishing and the Cultivation of Community.]